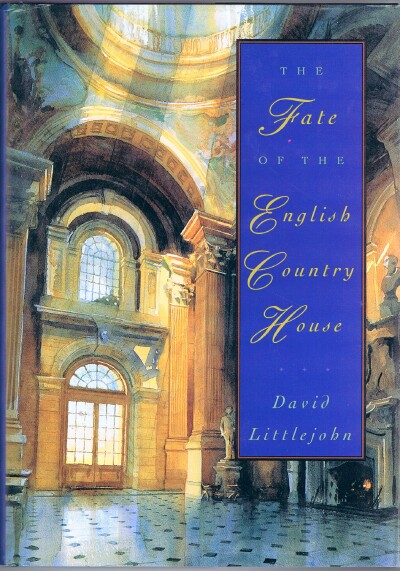 The Fate of the English Country House

Publisher's full blue cloth, gilt lettering on spine. Generously illustrated with B&W photographs. "For millions of people in the English-speaking world, the now standard image of the British country house is Brideshead Castle in Wiltshire: the domed and doomed baroque country seat of the Marchmain family seen in the BBC adaptation of Evelyn Waughs novel, Brideshead Revisited. In real life, the house used for the television series is Castle Howard, one of the largest and most opulent private homes in England, located on 10, 000 acres of gardens, parkland, and woods in North Yorkshire, now visited by more than 200, 000 tourists a year. Between 3, 500 and 4, 000 country houses--large, often elegantly furnished and surrounded by extensive estates--remain more or less intact in England today, although frequently converted to non-residential uses. Whether in public or private hands, the best known of them have become a major magnet for British and foreign tourists, attracting about 20 million paying visitors each year. Country houses, with their furnishings and landscaped settings, have been called Englands one important contribution to art history. They figure prominently in the ongoing debate over how much of any National Heritage is worth preserving. In The Fate of the English Country House, David Littlejohn describes the past glories and troubled present condition of the stately homes of England, both those that continue to serve as private houses, and those that have been turned into museums, tourist attractions, convention centers, hotels, country clubs, schools, apartments, hospitals, even prisons. By means of extensive conversations with their owners and managers (the book contains more than 50 photographs of the houses), the author takes us on a private tour of these remarkable places and evaluates the many proposals that have been put forward for their survival. In the opening chapter we meet three near-neighbors in Oxfordshire, whose personal accounts introduce many of the themes of the book: the 11th Duke of Marlborough, whose family has been living at Blenheim Palace since 1710; the 21st Baron Saye and Sele, whose ancestors built romantic, moated Broughton Castle between the fourteenth and nineteenth centuries; and the Honorable Ann Harcourt, mistress of Stanton Harcourt Manor, which has belonged to her family since the twelfth century. Most of the conversations revolve around the financial, legal, and strategic problems of owning and running an immense, archaic estate, designed for an age of unquestioned privilege, grandiose entertaining, and an almost unlimited pool of servants: a time before income, capital gains, or inheritance taxes had to be taken into account, before one had to open ones gates to the hordes of tourists out Doing the Statelies between Easter Sunday and the end of October. Littlejohn finds that as government support for privately owned historic houses dries up, more and more of them are being converted to other uses, or left empty to decay, their paintings and furnishings sent to the auction houses to help pay tax and repair bills. As they grow more and more difficult to justify or maintain, English country houses have become increasingly endangered species in todays alien economic and political climate. What is at stake is a major piece of Englands architectural and cultural heritage, no easier to defend than superannuated ocean liners or great Victorian hotels. The Fate of the English Country House addresses the immediate future of these homes and allows readers to contemplate the history of great houses that have, in some cases, been owned and occupied by the same families for 200, 400, 600, or even 900 years.". Both the volume and the unclipped dust jacket are in almost perfect condition, except for a few minor stains on the upper board, else as new. NEAR FINE/FINE.. B&W Photographs. 4to 11" - 13" tall. 344 pp

Title: The Fate of the English Country House

The Fate of the English Country House