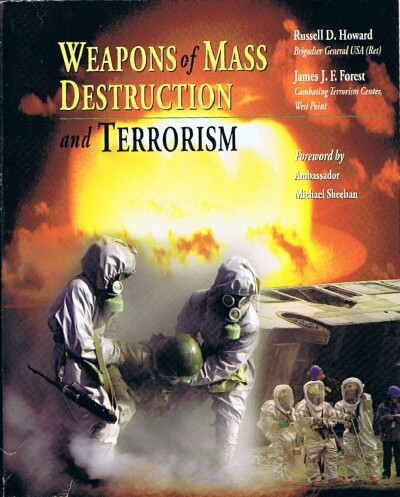 Weapons of Mass Destruction and Terrorism

Publisher's glossy wraps. In WEAPONS OF MASS DESTRUCTION AND TERRORISM, Brigadier General (Retired) Russell Howard and Dr. James Forest have collected original and previously published seminal articles and essays by scientists, academics, government officials, and members of the nation’s security and intelligence communities. The editors and several of the authors write from practical field experience in nonproliferation and counterterrorism efforts. Others have had significant responsibility for developing government policies to address the threat of weapons of mass destruction and terrorism. The contributors include a majority of the significant names in the field including Bruce Hoffman, Brian Jenkins, Jonathan Tucker, Rohan Gunaratna, David Franz, Richard Betts, William Rosenau, and David Albright.Unit One of the book introduces key terms and addresses important strategic and policy debates. Authors explain how the new forms of terrorism affect the post-9/11 security environment and introduce the notion that weapons of mass destruction could give terrorists short-term, asymmetric attack advantages over conventional military forces. Unit Two offers detailed accounts of the characteristics, availability, and dangers of specific types of WMD, along with four case studies that associate theory with practice—an important feature of this volume. Unit Three deals with past, present, and future national and international responses to—and defenses against—the threat of WMD terrorism. And in the final section of the volume, authors predict future WMD threats and seek to draw on past events and mistakes in order to identify lessons and strategies for the future.Appendices include a primer on bioterrorism and fact sheets on chemical, biological, nuclear and radiological terrorism.. The volume shows only the slightest shelf-wear, otherwise unmarked, unread, tight, square, and clean. NEAR FINE. . Small 4to 9" - 11" tall. 598 pp

Weapons of Mass Destruction and Terrorism