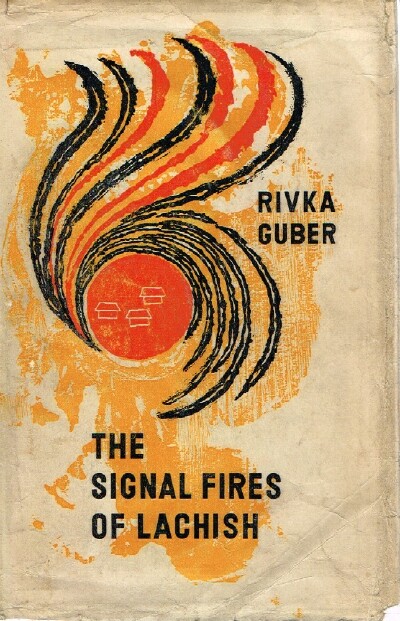 THE SIGNAL FIRES OF LACHISH

Publisher's full light brown cloth, gilt (brown) lettering on spine. 8vo. 282 pp. Former owner's printed bookplate on fep, gift inscription on ffep, coffee stain on cover and preliminary pages only, else near fine. The price-clipped dust jacket (now in Mylar) is soiled, chipped, and has several closed tears. GOOD/POOR. A pioneer woman's story of the early days of Israel. This second book relates with truth and compassion Israel's struggle in the pioneer days to absorb and integrate the thousands of new immigrants. Written with "extraordinay humanity and vitality".Rivka Guber was born in 1902 to a family of Jewish farmers who for generations had lived in the village of Vilaszashatanovo Witbesc in the Charuson county in the Ukraine. From early childhood she was accustomed to hard work in the fields and the cow shed. Nevertheless, she completed elementary school in the village, and since she showed a promising spark of ability, she was sent to continue her studies at the school in the county's central district of Watrinoslav. There she finished high school and two years of university. She experienced the terror of the Bolshevik revolution when her father, along with all the adults of the village, was recruited into the war and the village was controlled in turn by the various forces which were fighting each other. In 1921 she married Mordechai Guber, a yeshiva graduate and a Hebrew teacher who later became an agricultural instructor in Israel and headed the regional councils of Be'er Tuvia and Lachish. In 1925 they settled in Rehovot where Rivka worked as a teacher. They later left Rehovot in order to help establish Moshav Kfar Bilu. During World War II Rivka left her husband and her small children to join the British Army. In 1939 the Guber family was among the founders of Kfar Warburg a moshav in the south. It was while living there that, in the War of Independence, she lost her two children, Ephraim and Zvi, in whose memory the moshav "Kfar Achim" was named. During those years, Rivka served as an educator and principal at the Achim School in Kiryat Malachi. She dedicated all her energy to immigrant absorption and to the education of olim (new immigrants) living in the Kastina ma'abara or transit camp. During those gray days, the children took refuge in her home. In 1956 the Guber family donated their house and flourishing farm to the Magen Fund, and moved with their daughter, Chaya, to a remote area of the Lachish region where they helped establish a string of moshavim and the city of Qiryat Gat. After the couple retired they lived for two years in Kfar Achim; however due to Mordechai's poor health, they moved to a senior citizen's home in Tel-Aviv. Even towards the end of her life Rivka continued to help those in need. She traveled everywhere, even as far as Dahab near the southern tip of Sinai where a former pupil from the Kastina transit camp had established the settlement of Di Zahav. Rivka wrote many books including The Signal Fires of Lachish, The Brother, To the Torches of Lachish, The Tradition to Bequeath, Only a Path, and These Are the Legends of Kfar Achim, which were distributed throughout the world and were translated into many languages, including Japanese. In 1979 she was part of the official Israeli entourage accompanying then Prime Minister Menachem Begin to the United States to sign the Camp David Peace Treaty. In the year 1981 she met her tragic death. Such was the bitter end to "The Mother of Sons", a title bestowed upon her by her admirer, David Ben Gurion. . 8vo - over 7¾" - 9¾" tall

Title: THE SIGNAL FIRES OF LACHISH

THE SIGNAL FIRES OF LACHISH