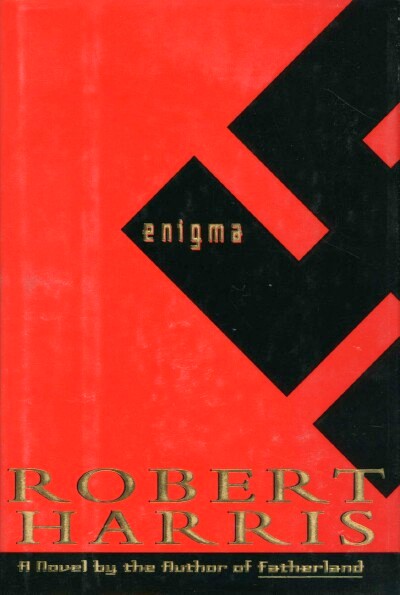 FIRST U. S. EDITION (stated). Quarter bound in publisher's black cloth over red boards, gilt lettering on spine, author's initials, gilt, on cover. Fore-edge deckle. There were two great, top secret Allied endeavors during World War II: the Manhattan Project, which developed the atomic bomb in New Mexico, and the program at Bletchley Park, a rural town in Britain, where the finest mathematicians and cryptographers attempted to break the Nazis' unbreakable Enigma code. Winning the war depended on the success of both projects. In Enigma, Robert Harris transports us to March 1943 and the desperate race against time at Bletchley Park. Tom Jericho has been called back, while recuperating from a nervous breakdown, to try to crack the Nazi's unbreakable Enigma code. If he solves the puzzle, thousands of Allied troops will live. If not, Jericho and his peers face the responsibility for a massacre. Meticulously researched and riveting, Enigma establishes Harris as the decade's finest author of wartime thrillers. This novel was made into a successful film starring Kate Winslett. Robert Harris is a former columnist for The Sunday Times of London and a correspondent for the BBC. His first novel, Fatherland, has been translated into over 20 languages. . Both the volume and the unclipped dust jacket are in perfect, pristine condition. AS NEW/AS NEW.. 8vo - over 7¾" - 9¾" tall. 320, (2) pp