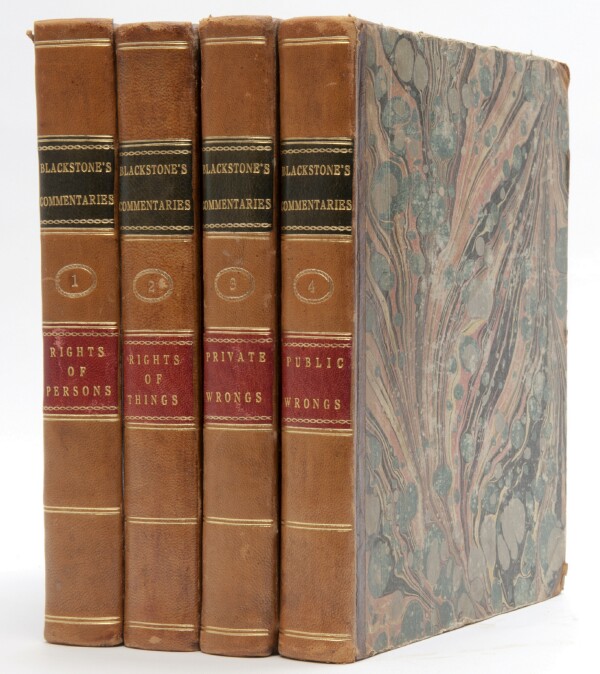 Commentaries on the Laws of England (Four Volumes, Complete)

Oxford: The Clarendon Press, 1766-1769. Four volumes uniformly bound in half calf over marbled boards, spines in six compartments separated by gilt borders, gilt titles and decoration on red and black labels in two compartments, volume numbers, gilt, in gilt borders in one compartment. Marbled endpapers. (iv), iv, 485, (i); (viii), 520, xix; viii, 455, xxvii; viii, 436, vii, (40) pp. Illustrated with two copperplate tables, Table of Consanguinity and fold-out Table of Descents in Volume Two. Blackstone’s Commentaries are "a monument of the Anglo-American legal and political system and one of the key influences on the thought of the Founding Fathers and the shaping of the Constitution. “All our formative documents—the Declaration of Independence, the Constitution, the Federalist Papers, and the seminal decisions of the Supreme Court under John Marshall—were drafted by attorneys steeped in Sir William Blackstone’s Commentaries on the Laws of England. So much was this the case that the Commentaries rank second only to the Bible as a literary and intellectual influence on the history of American institutions” (Robert Ferguson). Blackstone’s impact on American political and legal thinking was profound and immediate. In 1775 Edmund Burke observed that nearly as many copies of Blackstone’s Commentaries had been sold in America as in England. Thomas Jefferson observed that Blackstone’s Commentaries were “the most lucid in arrangement which had yet been written, correct in its matter, classical in its style, and rightfully taking its place by the side of the Justinian institutes.” A set of Blackstone’s Commentaries is a cornerstone of any library of the history and thought of the Founding Fathers. [Printing and the Mind of Man 212. Grolier 100 English Books 52.]. MIXED FIRST AND SECOND EDITIONS IN MATCHING CONTEMPORARY BINDINGS. Volumes One and Two are Second Editions, Volumes Three and Four are First Editions. All volumes are in excellent condition. A former owner's name (John Black) is neatly written on each title page. The boards are all very lightly bumped. The hinges in volumes one and two have been professionally reinforced. Very light, mild foxing throughout. Both Tables are in excellent condition. A beautiful and extremely scarce set. VERY GOOD.. 4to - over 9¾" - 12" tall

Title: Commentaries on the Laws of England (Four Volumes, Complete)

Commentaries on the Laws of England (Four Volumes, Complete)