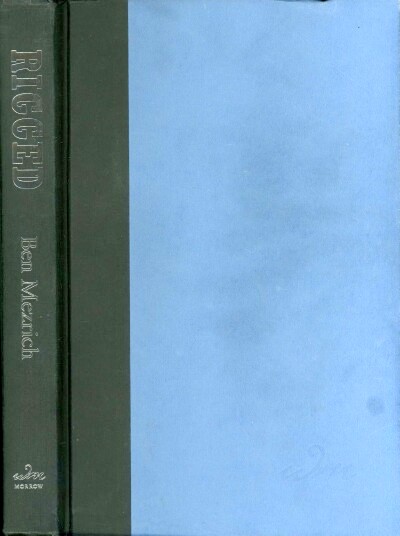 Rigged: The True Story of an Ivy League Kid Who Changed the World of Oil, from Wall Street to Dubai

First Printing. Quarter bound in publisher's black cloth over blue boards, gilt (silver) lettering on spine, red endpapers. 8vo. 294, (1) pp. This is an unmarked, unread copy in perfect condition except for a small ding on the top of the front board, else fine. NEAR FINE. Ben Mezrich (born 1969) is an American author from Boston, Massachusetts, who started out writing fiction but later expanded into non-fiction. He graduated magna-cum-laude from Harvard in 1991. He has since published ten books which have together sold over three million copies in twenty different languages. Some of his books have been written under the pseudonym Holden Scott. Mezrich attended Princeton Day School, in Princeton, New Jersey. Mezrich is best known for his first non-fiction work, Bringing Down the House: The Inside Story of Six MIT Students Who Took Vegas for Millions. This book tells the story of a group of students from MIT who bet on blackjack games using a sophisticated card counting system, earning millions of dollars at casinos in Las Vegas and other gambling centers in the United States and the Caribbean. The story was made into the movie 21, released in 2008. After the book's publication, Mezrich was frequently interviewed, asked to speak in a number of forums, and was published in the Boston Globe. The Globe later debunked much of the reporting in Bringing Down the House, claiming that the book describes numerous events that never took place, and "is not a work of nonfiction in any meaningful sense of the word." In 2004, Mezrich published a new book called Ugly Americans: The True Story of the Ivy League Cowboys Who Raided the Asian Markets for Millions. Also a nonfiction work, this book recounts the exploits of an American named John Malcolm, who was an assistant securities trader. In 2005 Mezrich published Busting Vegas: The MIT Whiz Kid Who Brought the Casinos to Their Knees a semi-sequel to Bringing Down the House. The book tells the story of another student involved in a similar Blackjack team, but one that used more advanced techniques than the ones discussed in the first book. In 2007, Mezrich published Rigged which recounts the formation of the Dubai Mercantile Exchange by two young visionaries, one in the New York Mercantile Exchange and the other in the Dubai Ministry of Finance. In 2008, Boston magazine and The Boston Globe investigated the accuracy of Mezrich's non-fiction, identifying occasions in his blackjack books where scenes were invented out of whole cloth. . 8vo - over 7¾" - 9¾" tall

Title: Rigged: The True Story of an Ivy League Kid Who Changed the World of Oil, from Wall Street to Dubai

Rigged: The True Story of an Ivy League Kid Who Changed the World of Oil, from Wall Street to Dubai