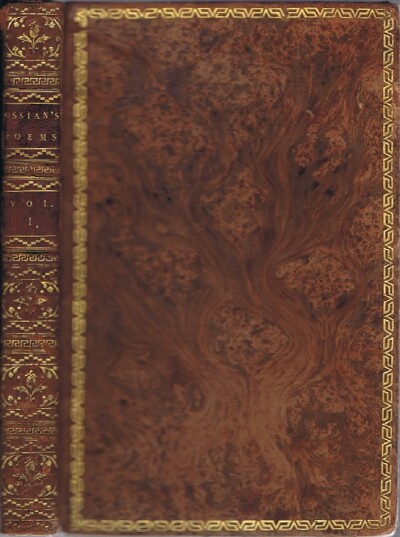 The Poems of Ossian (Two Volumes-Complete)

Bound in contemporary full leather, spines in six compartments separated by gilt borders, gilt lettering in two compartments on red panels, gilt decoration in other compartments, gilt borders on covers, gilt dentelles, marbled endpapers. In 1760, James MacPherson (1736-96), published "Fingal, an Ancient Epic Poem" his first translation of an ancient Gaelic poem composed by the warrior/poet Ossian a thousand years before. Praised by Schiller, quoted at length by Goethe, and beloved by Napoleon, a complete translation of the works of Ossian followed quickly upon the heels of its predecessor, but like "Fingal," it was a monumental literary fraud unparalleled in the history of European scholarly letters. Composed entirely by MacPherson, Ossian was entirely a figment of Macpherson's imagination. In the following two years, MacPherson published two additional fragments, "Fragments" and "Temora." MacPherson had compiled fragments of ancient Gaelic poetry, which he interspersed with his own work, and published them all together, again as the work of Ossian, in 1765. This first collected edition, "The Works of Ossian" (1765), contains 400 or so textual revisions, mostly minor in nature, but for his second collected edition Macpherson reworked his entire text stylistically, and reordered the poems 'so as to form a kind of regular history of the age to which they relate'. When faced with skeptics, including Samuel Johnson, MacPherson was forced to fabricate his sources. [Lowndes 1736]. Also published there for the first time were MacPherson's prefatory discussion of the nature and merits of his 'translation' into prose rather than verse, doubting 'whether the harmony which these poems might derive from rhime could atone for the simplicity and energy, which they would lose'. He gives as an example a fragment of an old Norse poem translated by way of Gaelic into contemporary English prose, and then into contemporary English verse. The preface is dated 'Aug. 15, 1773'; it was less than six weeks later that Boswell and Johnson, in Ulinish on the Isle of Skye, were talking with Donald M'Queen about Ossian. 'I look upon M'Pherson's Fingal to be as gross an imposition as ever the world was troubled with', said Johnson. 'Had it been really an ancient work It would have been a curiosity of the first rate. As a modern production, it is nothing' (Boswell's Journal of a Tour to the Hebrides, ed. Hill-Powell, in Life of Johnson, V, 240-3) Johnson mentions this discussions with M'Queen in "Journey to the Western Islands" (first edition, pp. 271-7) in the course of a sustained denunciation of MacPherson's 'translations' and their apologists. Within two days of the distribution of Johnson's "Journey" to the booksellers, MacPherson began frantic negotiations with William Strahan, his publisher as well as Johnson's, to have an advertisement printed retracting such expressions as 'insolence, audacity, and guilt', and to omit the provocative words from future editions. But the second edition was already in the press and in any case Johnson himself vetoed all capitulation. MacPherson then wrote a letter to Johnson the contents of which remain a matter for conjecture, but which elicited the famous reply, in part quoted in the press of the day, 'I received your foolish and impudent letter [&c. ]' (Life, II, 297-8, 511-13; Letters, II, 168-9) Meanwhile, in response to Johnson's assertion that 'the editor, or author, never could shew the original' (Journey p. 273) MacPherson persuaded Thomas Becket, the original publisher of Fingal and Temora, to place a notice in the London Chronicle and the St. James's Chronicle confirming that the originals had been available for inspection in 1762. 'What does Becket mean by the Originals of Fingal and other poems of Ossian, which he advertises to have lain in his shop? ' asked Boswell in a letter. 'De non existentibus' wrote Johnson by way of reply, 'what cannot be produced must be treated as nonexistent' (Life, II, 294-7; Letters, II, 176-8) Five years after MacPherson had published "Fragments of Ancient Poetry" in 1760, his "translations" of Ossian were beginning to generate controversy, and at the end of the first volume in this edition comments on Ferdinando Warner’s "Remarks on the History of Fingal and Other Poems of Ossian" (1762) in which Warner claims that MacPherson has transferred Irish heroes to a Scottish context. It was probably Warner’s assertive, but flawed, criticism of Macpherson that led to further investigations into his texts. The poems, written in a loose, rhythmical style, filled with superaturalism and melancholy, influenced powerfully the rising romantic movement in literature, especially German literature. The poems were admired by Goethe, among others, for romantic rhythm and occasional passages of striking beauty. . Armorial bookplates on feps with additional signatures and former owner's stamp, otherwise unmarked. Corners bumped, boards and spines very lightly rubbed, pages supple, text block square and tight. An extremely handsome early set of this interesting work. VERY GOOD+. . 8vo - over 7¾" - 9¾" tall. xiv, (ii), 404; 436, (2) pp

The Poems of Ossian (Two Volumes-Complete)