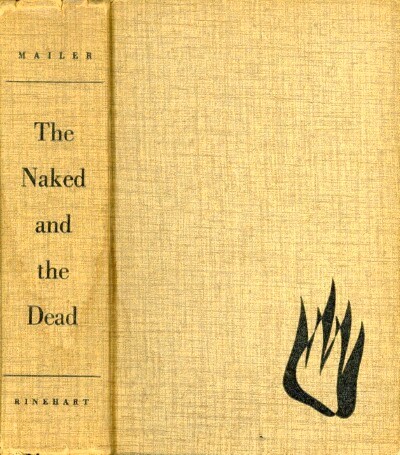 THE NAKED AND THE DEAD

FIRST EDITION of Mailer's masterpiece, Second Printing, with the flap of the second state dust jacket (with the $4.00 price) laid in. Publisher's original tan cloth embossed with black lettering on spine and flame medallion on cover, front flap from original dust jacket laid in. "The narrative presents, with great accuracy and power, the agony of the American troops in the Pacific campaign. It remains Mailer's best, and certainly the best war novel to emerge from the United States" (Burgess, 42-3).Written when Mailer was just twenty-five, The Naked and the Dead is one of the classic novels of World War II. It was both a critical and a commercial success. It immediately launched Mailer's literary career and it remains one of the most influential novels of the century. . Former owner's name neatly written on ffep, otherwise unmarked, head and heel of spine mildly worn, corners lightly bumped, tight and square. VERY GOOD.. 8vo 8" - 9" tall. (viii), 721 pp

Title: THE NAKED AND THE DEAD

THE NAKED AND THE DEAD