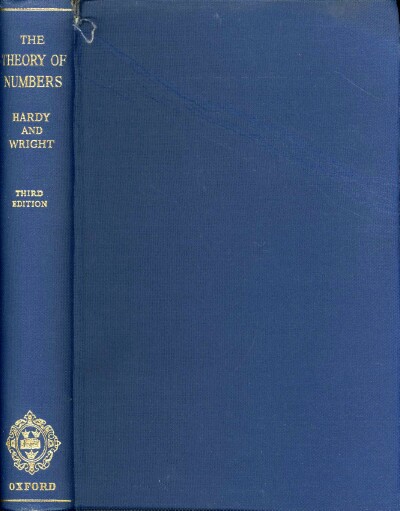 AN INTRODUCTION TO THE THEORY OF NUMBERS

Publisher's full blue cloth, gilt lettering and Oxford medallion, gilt, on spine. 8vo. 419 pp. A very clean copy, tight and square, with a former owner's printed bookplate on the ffep and one theorem in pencil on the final page, there is a small tear near the head of the spine, else fine. The unclipped dust jacket (now in Mylar) is in tatters. VERY GOOD/POOR. An Introduction to the Theory of Numbers by G. H. Hardy and E. M. Wright is found on the reading list of virtually all elementary number theory courses and is widely regarded as the primary and classic text in elementary number theory. Chapters include: I. The Series of Primes (1); II. The Series of Primes (2); III. Farey Series and a Theorem of Minkowski; IV. Irrational Numbers; V. Congruences and Residues; VI. Fermats Theorem and Its Consequences; VII. General Properties of congruences; VIII: Congruences to Composite Moduli; IX. The Representation of Numbers By Decimals; X. Continued Fractions; XI. Approximation of Irrationals by Rationals; XII. The Fundamental theorem of Arithmetic in ki; XIII. Some Diophantine Equations; XIV. Quadratic Fields; XV. Quadratic Fields; XVI. The Arithmetical Functions; XVII. Generating Functions of Arithmetical Functions; XVIII. The Order of Magnitude of Arithmetical Functions; XIX. Partitions; XX. The Representation of a Number by Two or Four Squares; XXI. Representation by Cubes and Higher Powers; XXII: The Series of Primes 3; XXIII. Kroneckers theorem; XXIV. Geometry of Numbers; Postscript; A List of books; Index of Special Symbols.. 8vo - over 7¾" - 9¾" tall

Title: AN INTRODUCTION TO THE THEORY OF NUMBERS

AN INTRODUCTION TO THE THEORY OF NUMBERS