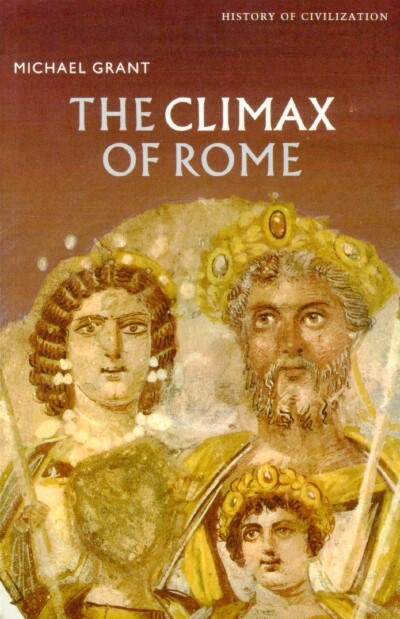 THE CLIMAX OF ROME

Publisher's glossy wraps. 299 pp. 12mo. Illustrated with numerous B&W photographs. This is a new, unopened copy in perfect, pristine condition. AS NEW. The period from the accession of Marcus Aurelius in AD 161 to the death of Constantine in 337 is often seen as little more than a protracted interval between the glories of the ancient world and the genesis of medieval Europe. Michael Grant's landmark study shows a much more creative picture: for despite internal strife and wars along vast frontiers, there was a stupendous military achievement which preserved the Empire for several centuries. This overall stability allowed Roman civilization to flourish, combining "an artistic, literary, spiritual and political brilliance with unparalleled lavishness". In these two centuries Michael Grant finds the climax of a "terrible but marvellous age". Michael Grant, one of the world's greatest writers on ancient history, has been a Fellow of Trinity College, Cambridge; Professor of Humanities at the University of Edinburgh; President and Vice-Chancellor of the Queen's University, Belfast; Vice-Chancellor of the University of Khartoum; and President of the Classical Association, the Royal Numismatic Society and the Virgil Society. He has published over fifty books, including The Ancient Historians, Ancient History Atlas, The Ancient Mediterranean, The Antonines, The Army of the Caesars, The Civilization of Europe, The Classical Greeks, Cleopatra, The Collapse and Recovery of the Roman Empire, Constantine the Great, The Dawn of the Middle Ages, The Etruscans, The Fall of the Roman Empire, The Founders of the Western World, The Twelve Caesars, From Rome to Byzantium, Greek and Roman Historians, Herod the Great, The History of Ancient Israel, The History of Rome, Jesus, The Jews and the Roman World, Myths of the Greeks and Romans, Readings in the Classical Historians, The Rise of the Greeks, The Roman Emperors, Saint Paul, A Social History of Greece and Rome, The Visible Past, Who's Who in Classical Mythology and The World of Rome. . 12mo - over 6¾" - 7¾" tall

Title: THE CLIMAX OF ROME

THE CLIMAX OF ROME