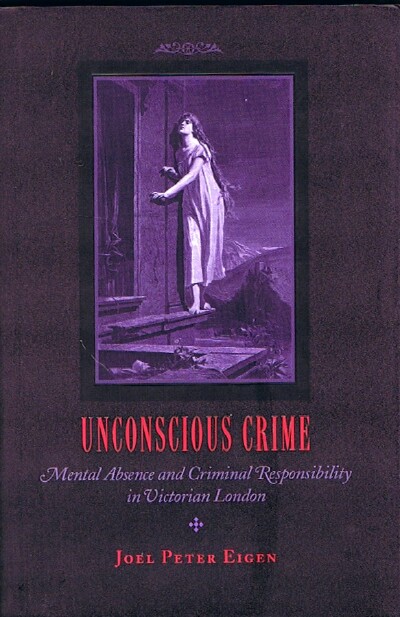 First Printing. Publisher's full black textured cloth, gilt (blue) lettering on spine, textured endpapers. 8vo. xii, 223 pp. Includes detailed Notes and Index. Publisher's release blurb laid in. Among the defendants appearing in Unconscious Crime are a sleepwalking, homicidal nursemaid; a "morally vacant" juvenile poisoner; a man driven to arson by a "lesion of the will"; and a Jekyll-and-Hyde assailant who underwent his transformation into beast-man while on the stand. These people are not characters from a mystery novelist's vivid imagination, but rather defendants who were tried at the Old Bailey, London's central criminal court, in the mid-nineteenth century. In Unconscious Crime, Joel Peter Eigen explores these and other cases in which defendants did not conform to any of the Victorian legal system's existing definitions of insanity, yet displayed convincing evidence of mental aberration. Instead, they were - or claimed to be - "missing," "absent," or "unconscious": lucid, though unaware of their actions. Based on extensive research in the Old Bailey Sessions Papers (verbatim courtroom narratives taken down in shorthand during the trial and sold on the street the following day), Eigen's book reveals a growing estrangement between law and medicine over the legal concept of the Person as a rational and purposeful actor with a clear understanding of consequences. The McNaughtan Rules of 1843 had formalized the Victorian insanity plea, guiding the courts in cases of alleged delusion and derangement. But as Eigen makes clear in the cases he discovered, even though defense attorneys attempted to broaden the definition of insanity to include mental absence, the courts and physicians who testified as experts were wary of these novel challenges to the idea of human agency and responsibility. Combining the colorful intrigue of courtroom drama and the keen insights of social history, Unconscious Crime depicts Victorian England's legal and medical cultures confronting a new understanding of human behavior, and provocatively suggests these trials represent the earliest incarnation of double consciousness and multiple personality disorder.. This is a new, unopened, unmarked copy. Both the volume and the dust jacket are in perfect, pristine condition. AS NEW/AS NEW. . 8vo - over 7¾" - 9¾" tall