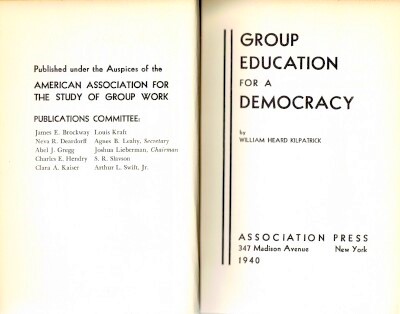 GROUP EDUCATION FOR A DEMOCRACY

Publisher's full green cloth, gilt lettering on spine. William Heard Kilpatrick (1871-1965) was an American pedagogue and a pupil, a colleague and a successor of John Dewey. Kilpatrick was born in White Plains, Georgia. He had an orthodox upbringing and was educated at Mercer University and Johns Hopkins University where he later became a mathematics teacher at High School and at Mercer University. He first met John Dewey in 1898 and again met him in 1907. Kilpatrick decided to make philosophy of education his specialty and occupied all courses by Dewey. From this developed a cooperation, which persisted up to Dewey's death in 1952. Both men's ideas directly impacted the 1932 founding of Bennington College in Vermont: they were both on the original College Board of Trustees, with Kilpatrick soon becoming President of the Board, and two of the original 12 houses on campus are named after them. His first teaching job was at Blakely Institute, a combined elementary and secondary public school in southwest Georgia, required that he attended a July 1892 summer at Rock College Normal School, Athens, GA. There he learned of the educational theories of German educator Friedrich Froebel, kindergarten founder and learning-through-play advocate. He again studied at Johns Hopkins University, summer 1895, then taught seventh grade at and was principal of Anderson Elementary School, Savannah, GA, 1896-97. He was at Mercer University, 1897-1906, taught mathematics, was vice-president, 1900, and acting president, 1904-06, but resigned when the trustees were concerned about his doubting the virgin birth. Kilpatrick spent the rest of his professional career and long life at TCCU. He received honorary LL.D. degrees from Mercer University, 1926; Columbia University, 1929; and Bennington College, 1938 (which he helped found in 1923 and where he was president of the board of trustees, 1931-38); the honorary D.H.L. degree from the College of Jewish Studies, 1952; and the Brandeis Award for humanitarian service, 1953. After retiring from TCCU, 1937, he was president of the New York Urban League, 1941-51; chairman of American Youth for World Youth, 1946-51; chairman of the Bureau of International Education, 1940-51; and on the board of directors of the League for Industrial Democracy. Kilpatrick had several critics but many more admirers and followers. Both heralded and criticized as John Dewey's chief educational interpreter, Kilpatrick was a leading advocate of progressive education. He died after a long illness at age 93 on February 13, 1965.. Former owner's bookplate on ffep, otherwise unmarked; spine moderately faded, head of spine worn, corners lightly bumped. VERY GOOD. . 8vo 8" - 9" tall. 219 pp

Title: GROUP EDUCATION FOR A DEMOCRACY

GROUP EDUCATION FOR A DEMOCRACY