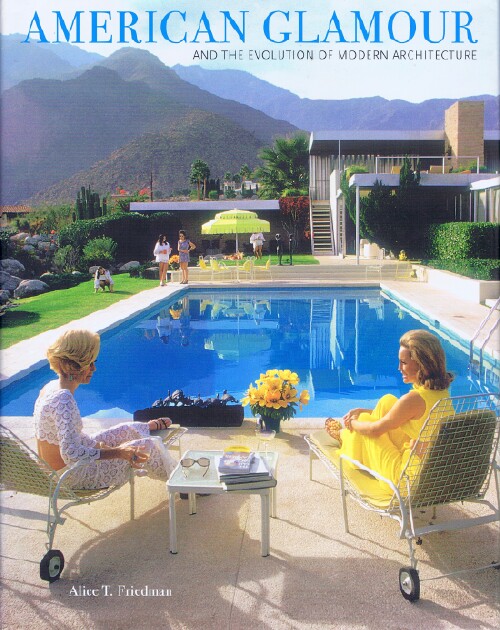 American Glamour and the Evolution of Modern Architecture

Signed by the author on the title page. Publisher's full orange cloth, silver lettering on spine and cover, orange endpapers, printed entirely on glossy stock. Profusely illustrated with 125 B&W and 40 color photographs. The sleek lines and gleaming facades of the architecture of the late 1940s and 1950s reflect a culture fascinated by the promise of the Jet Age. Buildings like Saarinen s TWA Terminal at JFK Airport and Philip Johnson's Four Seasons Restaurant retain a thrilling allure, seeming to transform the ordinary into the extraordinary. In this work, distinguished architectural historian Alice Friedman draws on a vast range of sources to argue that the aesthetics of mid-century modern architecture reflect an increasing fascination with glamour, a term widely used in those years to characterize objects, people, and experiences as luxurious, expressive, and even magical. Featuring assessments of architectural examples ranging from Mies van der Rohe's monolithic Seagram Building to Elvis Presley s sprawling Graceland estate, as well as vintage photographs, advertisements, and posters, this book argues that new audiences and client groups with tastes rooted in popular entertainment made their presence felt in the cultural marketplace during the postwar period. The author suggests that American and European architecture and design increasingly reflected the values of a burgeoning consumer society, including a fundamental confidence in the power of material objects to transform the identity and status of those who owned them. . Both the volume and the unclipped dust jacket are in perfect, pristine condition; unread, unmarked, tight, square, and clean. AS NEW/AS NEW.. Color and B&W Photographs. 4to 11" - 13" tall. 262 pp. Signed by Author

Title: American Glamour and the Evolution of Modern Architecture

American Glamour and the Evolution of Modern Architecture