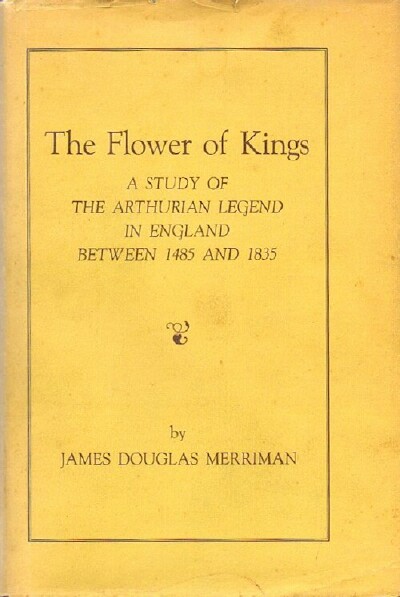 The Flower of Kings: A Study of the Arthurian Legend in England between 1485 and 1835

Publisher's full maroon cloth, gilt lettering and borders on spine, gold endpapers. Includes Note, Bibliography and Index. This is the copy belonging to Judson Boyce Allen (1932-1985), the author of several works on medieval literature, including "Distinction of Stories: The Medieval Unity of Chaucer's Fair Chain of Narratives for Canterbury;" and "The Friar as Critic: Literary Attitudes in the Later Middle Ages." This book provides for the first time in over seventy-five years a single, comprehensive, up-to-date account of the fortunes of the Arthurian story in England from the time of Malory to the beginning of the Victorian period. After a brief survey of the earliest forms of the legend, the author examines the slow decline of the myth in the English Renaissance until its near extinction by the middle of the eighteenth century, despite the attraction which it held for Spenser, Drayton, Jonson, and Dryden. Succeeding chapters show that even through the legend's vitality was reduced by both Dryden and Fielding, the Romantic movement brought Arthur back to life, Minor figures such as William Hilton and Richard Hole, together with Scott and Wodsworth, though they did not produce great poems on the subject, are shown nevertheless to have responded seriously to the legend. The book concludes with an England ready in its interests and sympathies for the great flowering of the Arthurian story among the Victorians. Throughout this survey, which covers both the major figures and a number of hitherto unexamined minor authors, James D. Merriman is concerned with several questions of considerable interest both scholarly and critical. . Moderate foxing on edges only; former owner's name, Judson Allen, in elegant calligraphy on ffep, brief bibliographic note by Allen on rear panel of dust jacket, now in mylar. NEAR FINE/VERY GOOD.. 8vo 8" - 9" tall. (xi),(ii),307 pp. Signed by Associated

Title: The Flower of Kings: A Study of the Arthurian Legend in England between 1485 and 1835

The Flower of Kings: A Study of the Arthurian Legend in England between 1485 and 1835