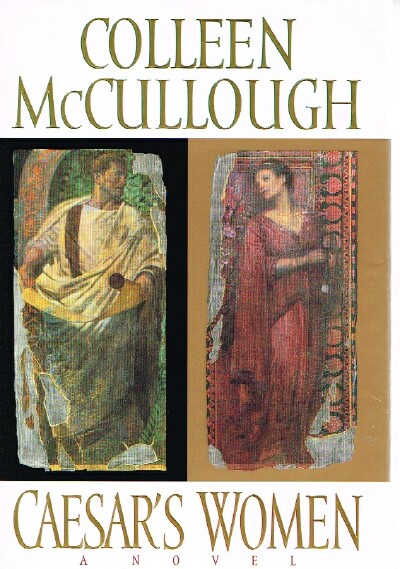 Quarter bound in publisher's gray cloth over ivory boards, gilt lettering on spine, maps on endpapers. Illustrated with maps and drawings by the author. "Senator and debtor, general and seducer, orator and would-be world conqueror, Julius Caesar, as depicted in this fourth installment (after Fortune's Favorites) in McCullough's epic re-creation of ancient Rome, is both a force of nature and something of a momma's boy. He worships his sophisticated mother Aurelia, "a fount of experience and a mine of common sense," while dismissing as "not important" his "expensive, idle, and monumentally silly" second wife, Pompeia. Its title notwithstanding, this marvelously researched and detailed novel focuses on traditional male pursuits-political intrigue, war, conquest-in the corruption-riddled late Roman republic even as it elucidates the behind-the-scenes influence of women in a repressively patriarchal society. Caesar, though tenderly loving and protective toward his daughter, Julia, pledges her as a child to the adolescent Brutus, with whose mother-the cruel, scheming Servilia-the future dictator of Rome has a purely sexual affair. Years later, Caesar cancels the betrothal in order to use his blossoming daughter as bait to forge a political alliance with the commander of the Roman legions. Meanwhile, Cicero, Caesar's main rival, is portrayed as an incurable vacillator and social climber who displays scant gratitude toward his "sour" and "ugly" wife, Terentia, despite her foiling a conspiracy against his life. With great brio, and ample attention to Roman customs and rites, as well as to the religious, sexual and social institutions of the day, including slavery, McCullough captures the driven, passionate soul of ancient Rome." - Publisher's Weekly. McCullough's seven books in her "Masters of Rome" series include "The First Man in Rome" (1990); "The Grass Crown" (1991); "Fortune's Favorites" (1993); "Caesar's Women" (1996); "Caesar" (1997); "The October Horse" (2002); and "Antony and Cleopatra" (2007). . Inscribed by the author on the half-title, otherwise unmarked, tight, square, and clean. FINE/FINE.. Masters of Rome Series. Vol. 4. B&W Illustrations. 8vo - over 7¾" - 9¾" tall. 696 pp. Signed by Author