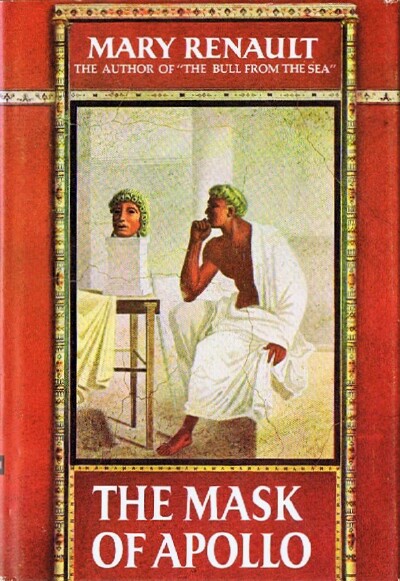 THE MASK OF APOLLO

Publisher's full burgundy cloth, silver lettering and red embossed decoration on spine. TEG (yellow). fore-edge deckle, orange endpapers. Reprint from the Book-of-the-Month Club News laid in. 8vo. (viii), 371 pp. This is an unmarked, unread copy, tight and square. The dust jacket is very lightly shelf-worn, with slight chipping at the heel of the spine only. FINE/NEAR FINE. Mary Renault is the acknowledged master of the Greek historical novel. In this masterful novel, set in Greece in the fourth century B. C. Mary Renault tells the story of the actor Nikeratos. Through the eyes of this warm, sympathetic and living character we experience the war-weary, self-searching world of his time. Always on his travels Niko, the tragedian, takes with him an antique mask of Apollo, a relic of the theatre's golden age, which from being his mascot becomes by degrees his artistic conscience. He refers to it his gravest decisions, when he finds himself at the center of political crises and dangerous intrigues. Much of the action of the novel is set in despotic Syracuse, in an era of decadence and strife. Dion, philosopher and soldier, with the help of his friend Plato, whom he has summoned from Athens, is trying to persuade the young tyrant, Dionysios the Younger, to accept the rule of law. Niko, immersed in his own on-stage tragedies, yet intimately involved with public figures and affairs, narrates the action of the greater human tragedy when Plato's fearless integrity sets off the clash between Dion and Dionysios, and looses the pent-up violence which culminates in the burning and sack of the city. This is a superb story, based on a remarkable knowledge of ancient Greece and told with a compelling, dramatic sweep. But shining through the web of history is always the vivid humanity of Niko, his loves, his devotion to his art. With this beautifully presented character, Mary Renault commands our attention and sympathy as never before. Deep human perception and understanding pervade The Mask of Apollo, and it is these that finally achieve its splendid evocation of the past. Mary Renault, perhaps the greatest historical novelist of our time, is the author of many histories and historical novels, including The Middle Mist (1945) Return to Night (1947) North Face (1949) The Charioteer (1953) The Last of the Wine (1956) The King Must Die (1958) The Bull from the Sea (1962) The Lion in the Gateway (1964) The Mask of Apollo (1966) Fire from Heaven (1969) The Persian Boy (1972) The Nature of Alexander (1975) The Praise Singer (1978) and Funeral Games (1981). . Book Club Edition. 8vo - over 7¾" - 9¾" tall

Title: THE MASK OF APOLLO

THE MASK OF APOLLO