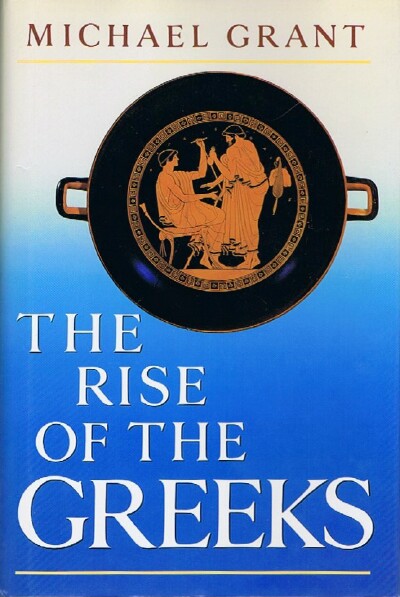 The Rise of the Greeks

Book Condition: Near Fine in As New dust jacket

First Printing (full number line). Quarter bound in publisher's gray cloth over blue boards, gilt lettering on spine. 8vo. xv, (ii), 391 pp. Illustrated with numerous B&W photographs and maps. This is a new, unmarked, unread copy. The boards are very slightly bowed, else as new. The unclipped dust jacket is as new. NEAR FINE/AS NEW. Michael Grant, one of the world's greatest writers on ancient history, has been a Fellow of Trinity College, Cambridge; Professor of Humanities at the University of Edinburgh; President and Vice-Chancellor of the Queen's University, Belfast; Vice-Chancellor of the University of Khartoum; and President of the Classical Association, the Royal Numismatic Society and the Virgil Society. He has published over fifty books, including The Ancient Historians, Ancient History Atlas, The Ancient Mediterranean, The Antonines, The Army of the Caesars, The Civilization of Europe, The Classical Greeks, Cleopatra, The Collapse and Recovery of the Roman Empire, Constantine the Great, The Dawn of the Middle Ages, The Etruscans, The Fall of the Roman Empire, The Founders of the Western World, The Twelve Caesars, From Rome to Byzantium, Greek and Roman Historians, Herod the Great, The History of Ancient Israel, The History of Rome, Jesus, The Jews and the Roman World, Myths of the Greeks and Romans, Readings in the Classical Historians, The Rise of the Greeks, The Roman Emperors, Saint Paul, A Social History of Greece and Rome, The Visible Past, Who's Who in Classical Mythology and The World of Rome. . 8vo - over 7¾" - 9¾" tall. 391 pp

Title: The Rise of the Greeks

Book Condition: Near Fine in As New dust jacket

The Rise of the Greeks