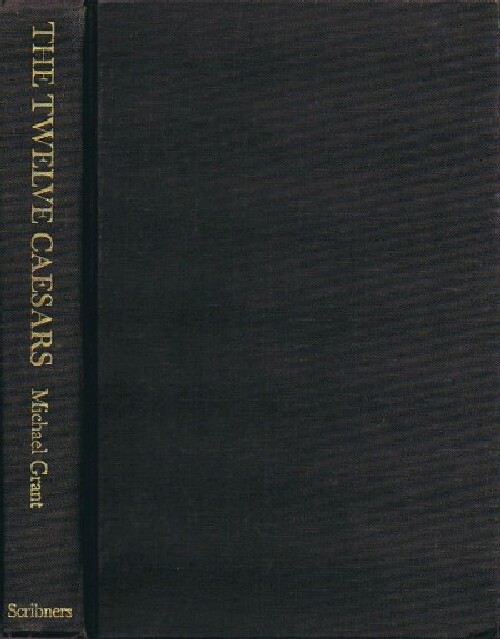 First Printing (full number line). Publisher's full black cloth, gilt lettering on spine. 8vo. xi, (i), 282 pp. llustrated with 38 black & white photographs on 16 pages and four maps. Includes Notes; Bibliography; Genealogical Tables; Dates of the Twelve Caesars; Dates of Subsequent Emperors; and Index. "The personalities of the Twelve Caesars at Rome, Julius Caesar and the first eleven Roman emperors who followed him, have profoundly impressed themselves upon the world. In this classic example of the unique blend of scholarship and readability that has made him one of the most popular authors of ancient history, Michael Grant penetrates the fog of rumor and speculation surrounding these dynamic leaders, and explores the biographer Suetonius' claims about their sexual abnormalities and other aberrations." "The Twelve Caesars bore the perilous responsibility of governing an empire comparable in its magnitude to the United States today. It is a timeless concern of mankind to measure the power that such men, and their advisors, wield. For example, are we justified after a study of Tacitus in applying to the Roman Caesars Lord Acton's saying that "absolute power corrupts absolutely?" This is one of a number of questions, relating to their exercise of authority, that Michael Grant endeavors to answer in this timeless work. "Michael Grant, one of the world's greatest writers on ancient history, has been a Fellow of Trinity College, Cambridge; Professor of Humanities at the University of Edinburgh; President and Vice-Chancellor of the Queen's University, Belfast; Vice-Chancellor of the University of Khartoum; and President of the Classical Association and the Virgil Society. He has published over fifty books, including "The Ancient Historians", "Ancient History Atlas", "The Ancient Mediterranean", "The Antonines", "The Army of the Caesars", "The Civilization of Europe", "The Classical Greeks", "Cleopatra", "The Collapse and Recovery of the Roman Empire", "Constantine the Great", "The Dawn of the Middle Ages", "The Etruscans", "The Fall of the Roman Empire", "The Founders of the Western World", "From Alexander to Cleopatra", "From Rome to Byzantium", "Greek and Roman Historians", "Herod the Great", "The History of Ancient Israel", "The History of Rome", "Jesus", "The Jews and the Roman World", "Myths of the Greeks and Romans", "Readings in the Classical Historians", "The Rise of the Greeks", "The Roman Emperors", "Saint Paul", "A Social History of Greece and Rome", "The Visible Past", "Who's Who in Classical Mythology" and "The World of Rome". . Former owner's name neatly stamped on fep, otherwise unmarked. Tight, square and clean. NEAR FINE. . B&W Illustrations and maps. 8vo - over 7¾" - 9¾" tall. (xii), 282 pp