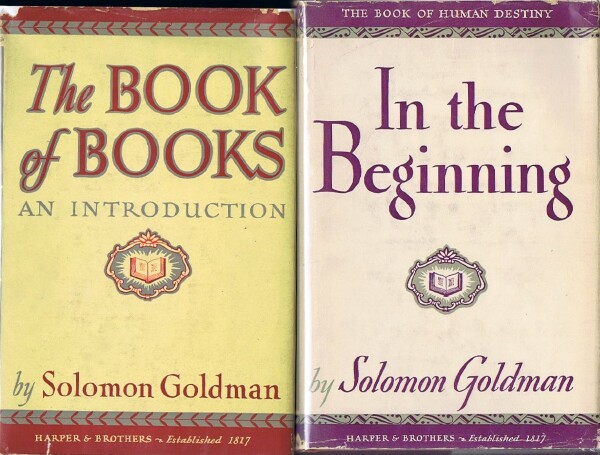 Inscribed by the author on the ffep of Volume One. Two Volumes, both stated first editions. Publisher's full red cloth, gilt lettering and borders on spines and covers. These are the two volumes published during the author's lifetime; a third volume was published posthumously. Volume One, published in 1948, is entitled "The Book of Books: An Introduction." Volume Two, published in 1949, is entitled "In the Beginning." Solomon Goldman was born in Russia in 1893. He came to the United States as a young child and received his early education in the New York City public schools. He graduated from New York University and did graduate work at Columbia University and the University of Chicago. He received his Jewish education at the Rabbi Isaac Elchanan Yeshivah, where he studied for six years, and at the Jewish Theological Seminary of America, where he was ordained as a rabbi in 1918. Goldman lectured widely and authored several books, including: "A Rabbi Takes Stock" (1931), "The Jew and the Universe" (1936), "Crisis and Decision" (1938), "Undefeated" (1940), a three volume study of the Bible and its influence on world literature, "The Book of Books" (1948), "In the Beginning" (1949), and "From Slavery to Freedom" (1958). Goldman died in Chicago in 1953, at the age of 59. . These are unmarked, unread copies, tight square and clean. The unclipped dust jackets, now in Mylar, are mildly edge-worn, chipped, and Volume 2 (only) has a closed tear at the head of the spine. FINE/VERY GOOD. . 8vo - over 7¾" - 9¾" tall. 459; 433 pp. Signed by Author

Title: The Book of Human Destiny (Two Volumes - "The Book of Books" and "In the Beginning")