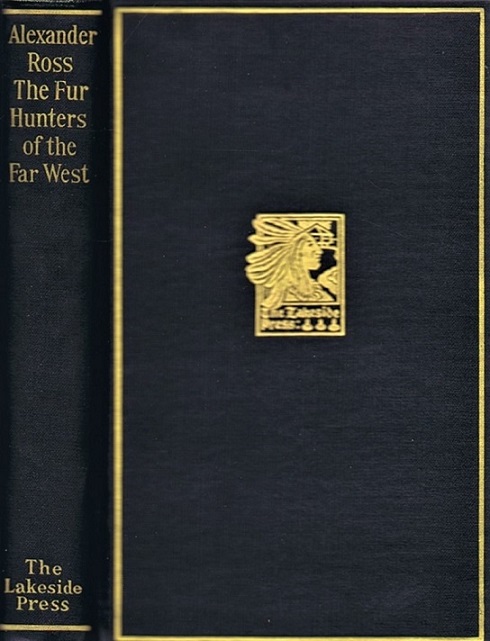 The Fur Hunters of the Far West: A Narrative of Adventures in the Oregon and Rocky Mountains

Publisher's full green cloth, gilt lettering on spine, gilt border and publisher's medallion, gilt, on cover, t.e.g., fore-edge deckle. Illustrated with Tissue-Protected engraved frontispiece view of Fort Nez Perces. Alexander Ross (1783-1856) was a fur trader and author. In 1811, while working for John Jacob Astor's Pacific Fur Company, Ross took part in the founding of Fort Astoria, a fur-trading post at the mouth of the Columbia River. During the same year he led a detachment up the Columbia River and founded Fort Okanogan where during the winter he was the sole PFC employee at the trading post. During his solitary posting, Ross' hair greyed from the stress of being socially isolated among the welcoming Syilx people, "savages who had never seen a white man before." In 1818 Ross acted as scribe for a trading party from the North West Company who traveled within sight of the Teton Range in modern Wyoming. He and trapper Daniel Potts apparently viewed some of the thermal features of what is today Yellowstone National Park. Each of them produced an account of these features, with Ross reporting that "...boiling fountain having different degrees of temperature were very numerous; one or two were so very hot as to boil meat." Ross explored various territories of the Pacific Northwest. In 1824, while searching the mountain wilderness of what is present day Idaho, known to them as Columbia District, for beaver, Ross came up the Wood River and discovered Galena Summit on September 18. Leading a large brigade of Hudson's Bay Company trappers, he wondered if he could get through unknown mountains and rocky defiles that obstructed his passage back to his base of operations at present Challis. Unwilling to turn back he pressed on to explore Stanley Basin and the difficult canyon beyond. When he reached Challis on October 5, 1824, he had traveled the route now followed by Idaho State Highway 75 from Bellevue to Salmon through mostly unexplored land. . Former owner's signature on ffep, otherwise unmarked. Tight, square and clean, rear hinge starting but strong. VERY GOOD. . The Lakeside Classics Series. Vol. 22. B&W Illustrations. 12mo 7" - 7" tall. xxxix, 317 pp

Title: The Fur Hunters of the Far West: A Narrative of Adventures in the Oregon and Rocky Mountains

The Fur Hunters of the Far West: A Narrative of Adventures in the Oregon and Rocky Mountains