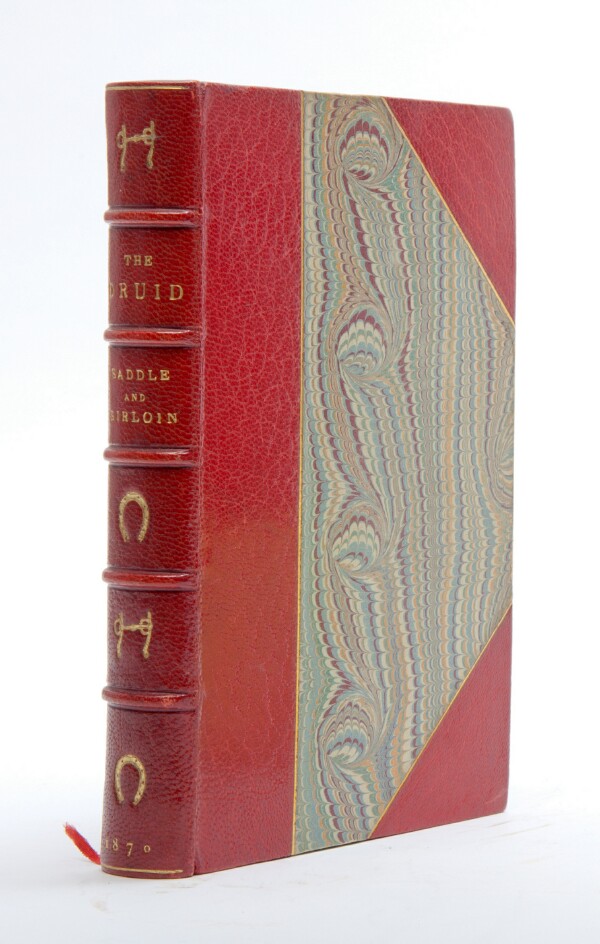 SADDLE AND SIRLOIN, OR ENGLISH FARM AND SPORTING WORTHIES

By: Dixon, Henry Hall (The Druid)

FIRST EDITION. Hardcover in fine binding. 12mo. (viii), 2, iv, 486, (4) pp. 1st Printing. Engraved Frontispiece and Vignette Title. Elegantly bound in three quarter red Morocco over marbled boards by Zaehnsdorf with spine in six compartments seperated by five raised bands, each compartment with either gilt lettering or decoration, gilt ruling on covers, teg, ribbon marker. Marbled endpapers. Magnificent Zaehnsdorf binding in perfect condition. Former owner's (Kenneth Baker Schley) printed bookplate on fep, otherwise a fine and exceptionally clean copy of this beautiful book. FINE+. "The title of this work should pretty well explain its nature. Sirloin speaks with ponderous emphasis for itself, and Saddle has a triple bearing on horses, sheep and pigs. It is, in fact, simply the record of what I have seen and heard during the last eleven years in the course of my summer rambles from Cumberland to Cornwall." - (from the Preface) Henry Hall Dixon (1822-1870) was an English sporting writer known by his nom de plume, "The Druid. " He was born at Warwick Bridge, Cumberland, in 1822, and was educated at Rugby and at Trinity College, Cambridge, where he graduated in 1846. He took up the profession of the law, but, though called to the bar in 1853, soon returned to sporting journalism, in which he had already made a name for himself, and began to write regularly for the Sporting Magazine, in the pages of which appeared three of his novels, Post and Paddock (1856) Silk and Scarlet (1859) and Scott and Sebright (1862) He also published a legal compendium entitled The Law of the Farm (1858) which ran through several editions. His other more important works were Field and Fern (1865) giving an account of the herds and flocks of Scotland, and Saddle and Sirloin (1870) treating in the same manner those of England. He died at Kensington in 1870. . Steel engraving. 12mo - over 6¾" - 7¾" tall. (viii), 2, iv, 486, (4) pp

Title: SADDLE AND SIRLOIN, OR ENGLISH FARM AND SPORTING WORTHIES

SADDLE AND SIRLOIN, OR ENGLISH FARM AND SPORTING WORTHIES