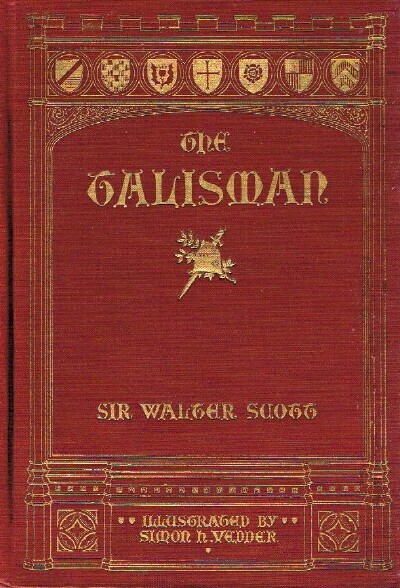 The Talisman: A Tale of the Crusades

Original publisher's antique red cloth, gilt titles and medallion on spine, gilt titles and gilt-ruled decorations on cover, including border comprised of crennelated gothic tower with architectural details and seven shield medallions, framing titles and central medallion, t.e.g. Preface by the Hon. Mrs. Maxwell Scott of Abbotsford. Illustrated with reproductions in color of twelve original drawings by Simon Harmon Vedder. "The Talisman" takes place at the end of the Third Crusade, mostly in the camp of the Crusaders in Palestine. Scheming and partisan politics, as well as the illness of King Richard the Lionheart, are placing the Crusade in danger. The main characters are the Scottish knight Kenneth, a fictional version of David of Scotland, Earl of Huntingdon, who returned from the third Crusade in 1190; Richard the Lionheart; Saladin; and Edith Plantagenet, a relative of Richard. It was first published in 1825 as the second of Scott's "Tales of the Crusaders," the first being "The Betrothed." . Handsome book is in extremely good condition, with only minor cover wear. The binding is tight and the pages clean. There is a bookplate on the fpd ("Julia Newbold Keasbey - Her Book"), and a handwritten inscription of the ffep ("Julia Newbold Keasbey | from her father | with loving birthday [--](14th) | March 1st 1921"). NEAR FINE. . Color Illustrations. 8vo (9 x 6.5"). xxii, 389 pp

Title: The Talisman: A Tale of the Crusades

The Talisman: A Tale of the Crusades