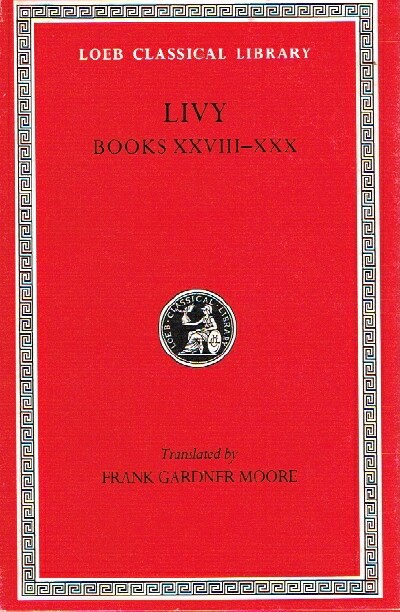 Publisher's full red cloth, gilt lettering on spine, publisher's device on cover, gilt. Illustrated with fold-out maps. Translated by Frank Gardner Moore. Text in English and Latin. Titus Livius Patavinus (64 or 59 BC – AD 17) was a Roman historian who wrote a monumental history of Rome and the Roman people – Ab Urbe Condita Libri (Books from the Foundation of the City) – covering the period from the earliest legends of Rome before the traditional foundation in 753 BC through the reign of Augustus in Livy's own time. He was on familiar terms with the Julio-Claudian dynasty, advising Augustus's grandnephew, the future emperor Claudius, as a young man not long before 14 AD in a letter to take up the writing of history. Livy and Augustus's wife, Livia, were from the same clan in different locations, although not related by blood. The only extant work by Livy is part of his history of Rome from the foundation of the city to 9 BCE. Of its 142 books 1–10, 21–45 (except parts of 41 and 43–45), fragments, and short summaries remain. Livy’s history is a source for the De Prodigiis of Julius Obsequens (fourth century CE). . The volume is in perfect, unmarked condition. The unclipped dust jacket shows only the slightest shelf-wear. AS NEW/FINE.. The Loeb Classical Library Series. Vol. 381. Maps. 12mo (6.5 x 4.5"). (xi), 562, 18 pp