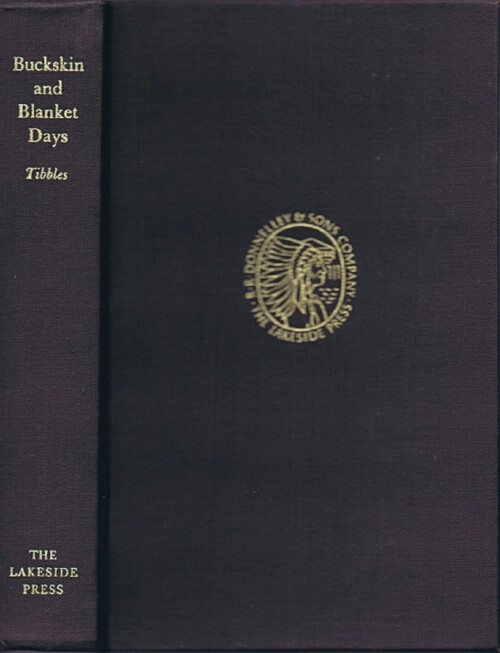 Buckskin and Blanket Days: Memoirs of a Friend of the Indians

Publisher's full brown cloth, gilt lettering on spine, gilt medallion on cover, t.e.g. Illustrated with B&W photographs and maps. Thomas Henry Tibbles (1840-1928) was a journalist and author from Omaha, Nebraska who became an activist for Native American rights in the United States during the late nineteenth century. Born in Ohio, he moved to Illinois with his parents. At 16 years of age, he traveled to Kansas and participated in the "Bleeding Kansas" slavery-related border conflict on the side of the abolitionists; there, he served under James H. Lane and John Brown. Taken prisoner by pro-slavery forces, he was sentenced to be hanged, but managed to escape. After the end of the Kansas hostilities, he spent some time with the Omaha indians, even accompanying them in a conflict with the Sioux. He was later active, among other things, as a Methodist preacher in the frontier territory before turning to journalism. As assistant editor of the Omaha Daily Herald, he was instrumental in bringing the case of Standing Bear and the Ponca Indian people before the United States District Court at Fort Omaha in 1879. This case was famous for its ruling that "an Indian is a person," with all the rights of full citizens. He was later married to Susette ("Bright Eyes") LaFlesche, a member of the Omaha tribe who had served as Standing Bear's interpreter at the trial. Tibbles was a witness to the aftermath of the massacre of Native Americans at Wounded Knee in 1891, and reported this tragedy to the world. From 1893-1895, he worked as a newspaper correspondent in Washington D.C. On returning to Nebraska, Tibbles became editor-in-chief of The Independent, a weekly Populist Party newspaper. He was the Populist Party nominee for Vice President of the United States in 1904. . The volume is in perfect, pristine condition; unmarked, unread, tight, square, and clean. AS NEW.. The Lakeside Classics Series. Vol. 83. B&W Photographs and maps. 16mo 6" - 7" tall. liv, 466 pp

Title: Buckskin and Blanket Days: Memoirs of a Friend of the Indians

Buckskin and Blanket Days: Memoirs of a Friend of the Indians