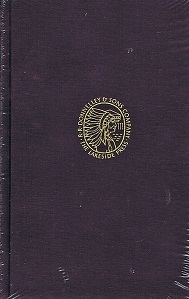 Publisher's full brown cloth, gilt lettering on spine, gilt Lakeside Press medallion on cover, t.e.g. Illustrated with two fold-out maps, frontispiece and 28 plates, six of which in color. As ship's surgeon Kane had accompanied the first American expedition to search for missing British explorer Sir John Franklin in 1850. "Kane quickly impressed British explorers with his intelligence and traveling experience. In August 1850 the fleet located Franklin's first winter base on Beechey Island, along with the graves of three of Franklin's men. Further searches by the Advance failed to locate Franklin's expedition. The Advance returned to the United States in September 1851. Kane's belief that Franklin might have gone further north persuaded Grinnell and the U.S. Navy to support a second expedition to search for the lost explorers. Kane led this new expedition in the Advance to seek a more northerly route near Greenland. Kane's expedition departed in 1853, traveling northward along the Greenland coast. As the ship entered Smith Sound, the channel separating Greenland from Ellesmere Island, Canada, heavy ice stopped its progress. Rather than retreat to the south, Kane elected to keep his ship in Smith Sound. The ice soon froze around the ship, trapping Kane and his men in the high Arctic for the winter. When spring arrived, Kane sent exploring parties to the north along Smith Sound. One of his men, William Morton, discovered a broad expanse of open water, which he thought was an ocean. Morton's report led Kane to the erroneous conclusion that there was an open polar sea. Kane did chart many new discoveries in what later became known as "the American route to the pole." The 1854 summer thaw failed to release the ship from the ice. Some of Kane's men, fearing that they would not survive another winter in the Arctic, demanded to go south to reach the Greenland settlements. Kane, unable to quell the mutiny, refused to abandon the ship and his sick men. The dissenters, who included Isaac Hayes, then insisted that Kane supply food and equipment for their escape. Kane reluctantly complied. Kane and his remaining men faced a second bleak winter in the Arctic. While strong men wilted, Kane, the invalid, became a pillar of strength. The innovative doctor traded with the local Inuit for food. He also used the bountiful supply of the ship's rats for food and as a remedy for scurvy. When Kane learned that the deserters were starving, he sent them food and assisted their return to the ship. During the summer of 1855 Kane successfully led his men south to the Greenland settlements. He quickly became the United States' first Arctic hero. From across the Atlantic, Franklin's wife implored Kane to come to England to organize a new search for her husband. The British government and the prestigious Royal Geographical Society also wished to honor the American hero. In October 1856 Kane reluctantly sailed to England, where his health rapidly deteriorated. Seeking a warmer climate, Kane sailed to Havana, Cuba, in December 1856, but his physical condition worsened. Kane died in Havana" . This volume is in perfect, pristine condition, unmarked, unread, tight, square, and clean; still in original shrink-wrap. NEW. . The Lakeside Classics Series. Vol. 94. Color and B&W plates and Maps. 16mo 6" - 7" tall. 447, (1) pp