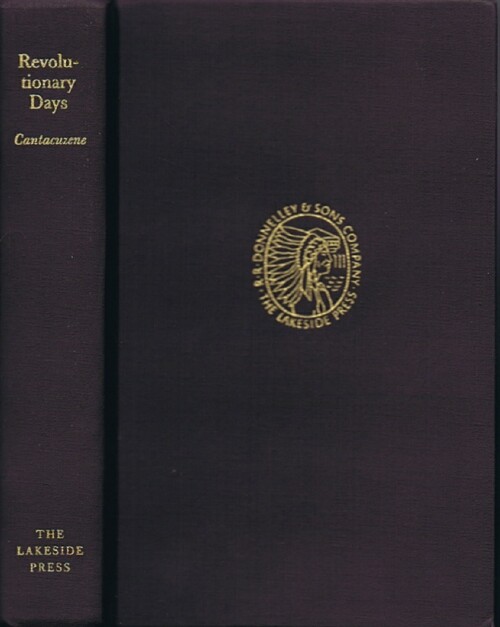 Publisher's full brown cloth, gilt lettering on spine, gilt medallion on front cover, t.e.g. Illustrated with B&W frontispiece and B&W photographs. Julia Dent Grant Cantacuzne Spiransky, Princess Cantacuzne, Countess Spiransky (1876-1975), was an American author and historian. She was the eldest child of Frederick Dent Grant and his wife Ida Marie Honor, and the first grandchild of Ulysses S. Grant, the 18th President of the United States. In 1899, she married Prince Mikhail Cantacuzne, a Russian general and diplomat. Princess Cantacuzne was the author of three first-person accounts of the events leading up to the Russian Revolution in 1917, as well as a personal historian of the Russian people during that time. As the wife of a Russian nobleman, she was in a primary position to observe both the Imperial and Bolshevik positions during the Revolution. Cantacuzne was the author of numerous articles which appeared in the New York Times, Saturday Evening Post, and Woman's Home Companion. Her books included, "Russian People; Revolutionary Recollections," (1919); "Revolutionary Days; Recollections of Romanoffs and Bolsheviki, 19141917," (1920); and "My Life Here and There." (1922). All of her books were published in the U.S. by Charles Scribner's Sons, and in London by the firm of Chapman & Hall. Revolutionary Days was republished in December 1999 by R.R. Donnelley & Sons Company. The Cantacuzino or Cantacuzne family, a princely family of Wallachia, Moldavia and Russia, claims descent from a branch of the Greek Kantakouzenos family, descended from the Byzantine Emperor John VI Kantakouzenos (reigned 13471354). In Russia, the family received princely (Knyaz, as opposed to Velikij Knyaz) status. In 1944 Prince Stefan Cantacuzino settled in Sweden, where his descendants form part of the unintroduced nobility of the country. . The volume is in perfect, pristine condition, unmarked, unread, tight, square, and clean. AS NEW.. The Lakeside Classics Series. Vol. 97. B&W Photographs. 16mo 6" - 7" tall. (lx), 449, (1) pp

Title: Revolutionary Days: Recollections of Romanoffs and Bolsheviki, 19141917: Including Passages from My Life Here and There, 1876-1917