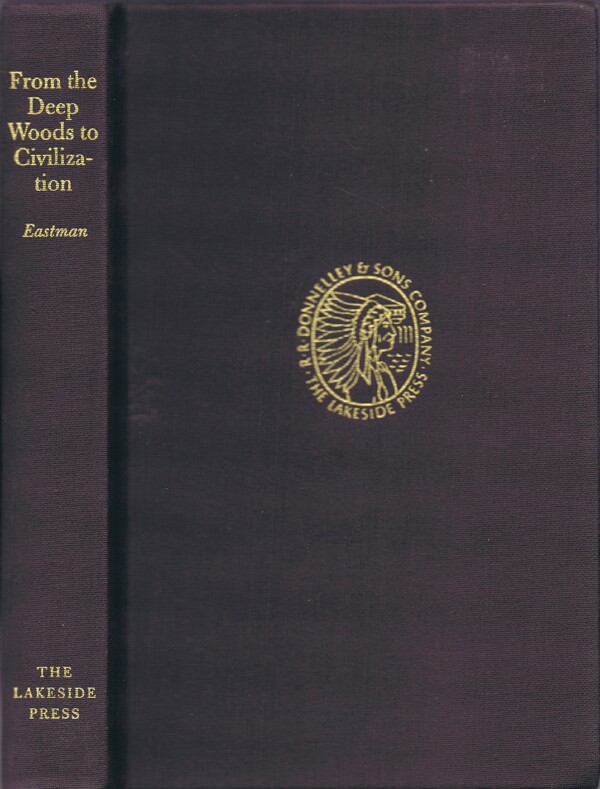 Publisher's full brown cloth, gilt lettering on spine, gilt medallion on cover. t.e.g. Illustrated with B&W photographs. This is the autobiography of Charles Alexander Eastman, first piblished by Little Brown in 1916. Eastman (born Hakadah and later named Ohye Sa; 1858-1939) was a Santee Dakota physician educated at Boston University, writer, national lecturer, and reformer. In the early 20th century, he was "one of the most prolific authors and speakers on Sioux ethnohistory and American Indian affairs." Eastman was of Santee Dakota, English and French ancestry. After working as a physician on reservations in South Dakota, he became increasingly active in politics and issues on native American rights, he worked to improve the lives of youths, and founded thirty-two Native American chapters of the Young Men's Christian Association (YMCA). He also helped found the Boy Scouts of America. He is considered the first Native American author to write American history from the Native American point of view. Eastman worked as an agency physician for the Bureau of Indian Affairs (BIA) Indian Health Service on the Pine Ridge Reservation and later at the Crow Creek Reservation, both in South Dakota. He treated many of the Indians after the Wounded Knee massacre.. The volume is in perfect, pristine condition, unmarked, unread, tight, square and clean. AS NEW.. The Lakeside Classics Series. Vol. 99. B&W Photographs. 12mo 7" - 7" tall. lxvii, 341, (1) pp