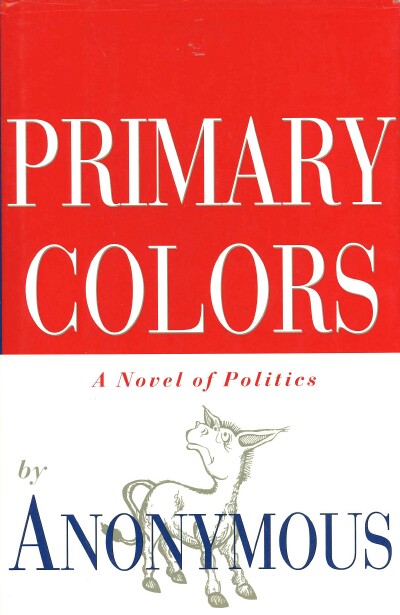 FIRST EDITION, FIRST PRINTING (Random House First Printings start with "2" in the print line. The line here is 2468B9753). 8vo (6.5 x 9.5"). (xii), 366, (6) pp. Quarter bound in pblisher's white cloth over gray boards, gilt lettering on spine. Young Henry Burton is half flattered, half shanghaied, by the governor of a small Southern state to join him as campaign staff, in a run for the presidency. What follows for Henry, and the reader, is an education in modern American electoral politics that in dramatic power, humor, psychological acuity, and insider knowledge beggars a hundred textbooks and a thousand lectures. This is the pseudonymous, anonymous novel closely based on Bill Clinton's first presidential campaign. The question of the identity of the book's author became the talk of Washington and the media as soon as the book was published and debate continued until a reporter from the Washington Post was able to identify Klein by the handwriting in the marginal notes on a set of galleys. The subsequent scandal became a debate about ethics in journalism. Klein was a columnist for Newsweek at the time of publication and had denied writing the book, as had his superiors at Newsweek. Klein was forced to leave Newsweek and took a position at The New Yorker. The first edition was immediately sold out, and the book has been reprinted at least eight times, and became a huge bestseller. The novel was the basis for the feature film of the same name staring John Travolta and Emma Thompson. An excellent copy of a highly readable and amusing novel. . Dust jacket shows only slight shelf-wear, very slight rubbing to spine. . 8vo - over 7¾" - 9¾" tall