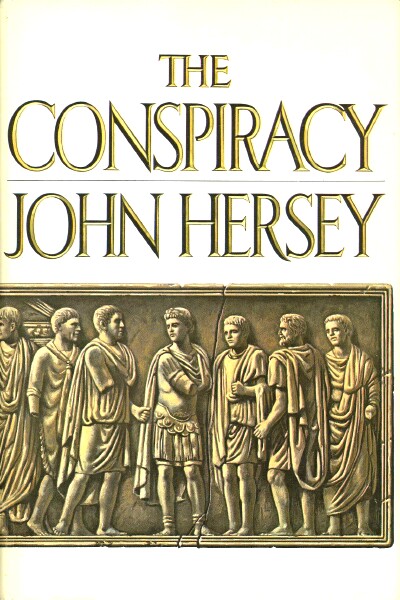 Hardcover with dust jacket. 8vo (6 x 8.5"). (viii), 274, (6) pp. Publisher's brown cloth, gilt lettering on spine, author's initials, gilt, in gilt frame on cover. Fore-edge deckle. T. E. G. (red). Nero's secret police believe they have come upon the first hints of a plot against the emperor's life. Once promising and gifted, the friend of poets and a pupil of the great Seneca, Nero has now bloodied himself and grown fat on power. He has turned his back on the men of intellect who used to be his chosen circle of friends and confidants. He has driven Seneca into retirement. He has banned the writings of Lucan, Rome's foremost poet. Crass, mediocre men, the military and the secret police, now have his ear and favor. While the emperor and his court give themselves over to the pursuit of pleasure, the secret police close in on, or perhaps foment or imagine, a conspiracy among the men of letters. The text of this book is set in Electra, a typeface designed by W. A. Dwiggins for the Mergenthaler Linotype Company and first made available in 1935. The book was composed, printed and bound by The Haddon Craftsmen, Scranton, PA. Pulitzer Prize-winning author John Hersey is also the author of "A Bell for Adano," "The Wall," "Too Far to Walk," and many other novels. . This is a new, unopened copy in pristine condition. AS NEW/FINE.. Book Club Edition. 8vo - over 7¾" - 9¾" tall. 275 pp