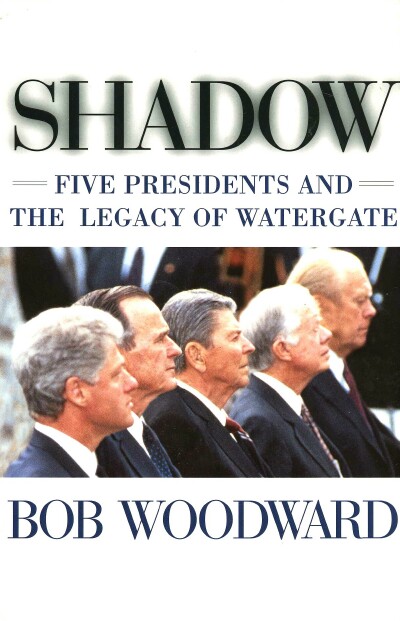 FIRST EDITION, FIRST PRINTING (Number Line 10 9 8 7 6 5 4 3 2 1) Hardcover with price-clipped dust jacket. 8vo. 608 pp. Quarter bound in publisher's black cloth over gray boards, gilt (silver) lettering on spine. Illustrated with 24 pages of B&W photographs. Extensive Notes and Index. This is a new, unopened copy in perfect condition (other than being price-clipped) AS NEW/FINE+. Thirty-two years ago, after Richard Nixon resigned the presidency, Gerald Ford promised a return to normalcy. "My fellow Americans, our long national nightmare is over, " President Ford declared. But it was not. The Watergate scandal, and the remedies against future abuses of power, would have an enduring impact on presidents and the country. In Shadow, Bob Woodward takes us deep into the administrations of Gerald Ford, Jimmy Carter, Ronald Reagan, George H. W. Bush and William Jefferson Clinton to describe how each discovered that the presidency was forever altered. He places special emphasis on the human toll, and shows the consequences of the new ethics laws, and an emboldened Congress and media. Powerful investigations increasingly stripped away the privacy and protections once expected by the nation's chief executive. Using presidential documents, diaries, prosecutorial records and hundreds of interviews with firsthand witnesses, Woodward chronicles how all five men failed first to understand, and then to manage, the inquisitorial environment. Shadow is an authoritative, unsettling narrative of the modern, beleaguered presidency. . 8vo - over 7¾" - 9¾" tall