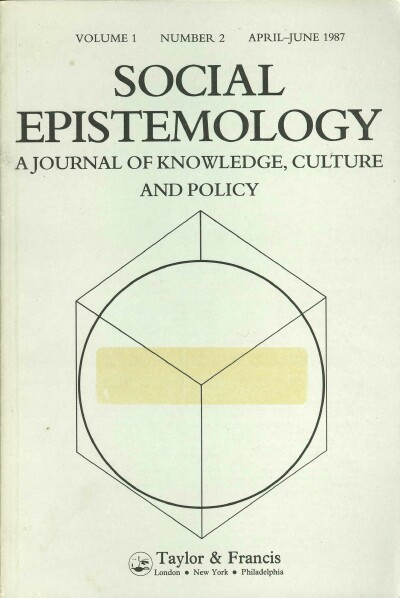 Softcover Journal. 98vo (6.75 x 9.75"). 7 pp. 1st Printing. Printed wraps. Small closed tear in rear cover and final two pages, not affecting text, small discoloration on front cover where a sticker was removed (see photo) else Fine. NEAR FINE. This, the second issue, includes a Symposium on Ethnocentrism and Knowledge Production with articles on Philosophy as an Instrument of Inter-American Understanding, Black Revolutionary Literature of the Sixties, the Engagement and Struggle of Academic and Social Scientists in South Africa, and others. Additional articles include Anti-intellectualism in Programs for Able Students, an Interview with Jerome McGann on Textual Scholarship as Literary History and Ideology Critique, The Technocratic Form in the Study of Mass Media Effects, Provocation on Belief, etc. The founding Editor, Steve Fuller, is Professor of Sociology at the University of Warwick. Trained in the history, philosophy, and sociology of science, and has promoted social epistemology as an interdisciplinary project in seven books, including the controversial Thomas Kuhn: A Philosophical History for Our Times (2000) and most recently Knowledge Management Foundations (2001) His works have been published in nine languages. His first book was Social Epistemology, in which Fuller seeks to reconcile normative philosophy of science and empirical sociology of knowledge. He reinterprets key problems in the philosophy of science, such as realism, the nature of objectivity, the demarcation of science from other disciplines, and the nature of our knowledge of other times and places. Extremely scarce. . 8vo - over 7¾" - 9¾" tall