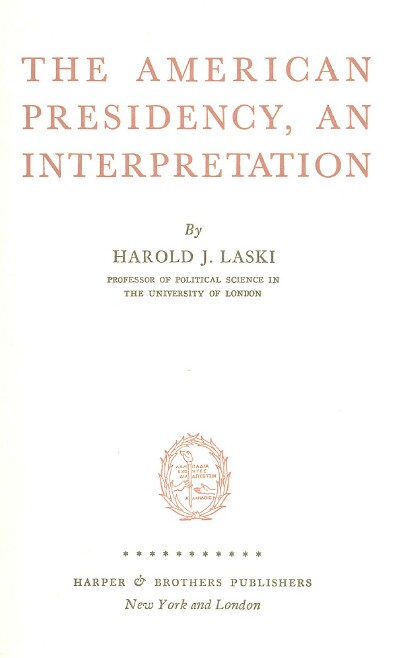 THE AMERICAN PRESIDENCY: An Interpretation

FIRST EDITION. Hardcover. 8vo (6 x 8.75"). viii, (ii), 278 pp. Bound in publishers full straw cloth, printed lettering on tan label on spine. Fore-edge deckle. Printed on thick card stock. Former owner's bookplate on ffep with date (1949) minor scuffing, else Fine+. FINE. At a time when the office of President of the United States is acquiring a new significance, both national and international, this refreshingly objective interpretation by a noted student of politics meets an urgent need. The President of the United States has a unique role. His powers and functions are subject to peculiar limitations that have their roots in the Constitution and in the historical traditions of a people who came to political life through rebellion against outworn conventions. With brilliant and sympathetic penetration Prof. Laski defines those qualities which make for success in the presidency; points to the various forces which hedge and delimit the presidential influence; shows the interaction between the presidential, legislative and cabinet offices; discusses the President's relations with his Cabinet, and with Congress and the Supreme Court. He searches out the strengths and weaknesses of the American system; and in conclusion offers suggestions for reform. This book is informal, alive, stimulating and to anyone concerned with American ways of life it will evoke a great deal of the fascination of our history. Professor Harold J. Laski of the London School of Economics and Political Science at the University of London was a Visiting Professor at Indiana University during 1939. This volume is, substantially, the course he delivered during that year. It is a fascinating study of the American presidency. . 8vo - over 7¾" - 9¾" tall

Title: THE AMERICAN PRESIDENCY: An Interpretation

THE AMERICAN PRESIDENCY: An Interpretation