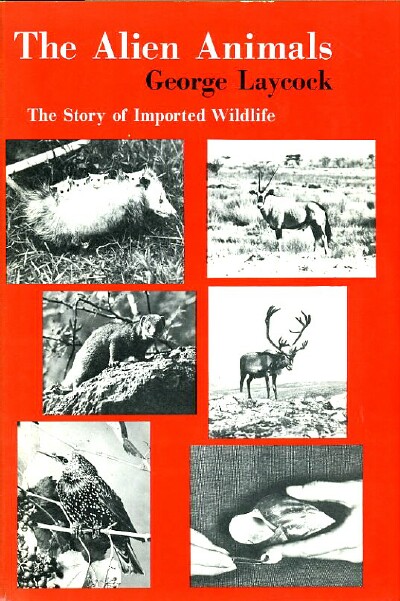 THE ALIEN ANIMALS: The Story of Imported Wildlife

FIRST EDITION (stated). Hardcover with unclipped ($4.95) dust jacket. 8vo (5.5 x 8.5"). 240 pp. Quarter bound in publisher's black cloth over beige boards, gilt and black lettering on spine. Red endpapers. Illustrated with 17 B&W photographs. This is a new, unopened copy in perfect condition, with no ownership marks or other blemishes. AS NEW/AS NEW. A nationally known writer and outdoorsman, Laycock is widely traveled and has written several books and many magazine articles on issues relating to nature. Here he deals with the problems encountered with imported wildlife, discussing the pitfalls and potential of such importation. Laycock explains how man has, with all good intentions, introduced species of animals beyond their natural boundaries, thus upsetting nature's balance and distribution system of her creatures. Man, the supreme meddler, has never been quite satisfied with the world as he found it, and as he has dabbled in rearranging it to his own design, he has frequently created surprising and frightening situations for himself. In recounting the bizarre things that can happen when an alien animal is introduced, he sounds a warning for the future. . 8vo - over 7¾" - 9¾" tall

Title: THE ALIEN ANIMALS: The Story of Imported Wildlife

THE ALIEN ANIMALS: The Story of Imported Wildlife