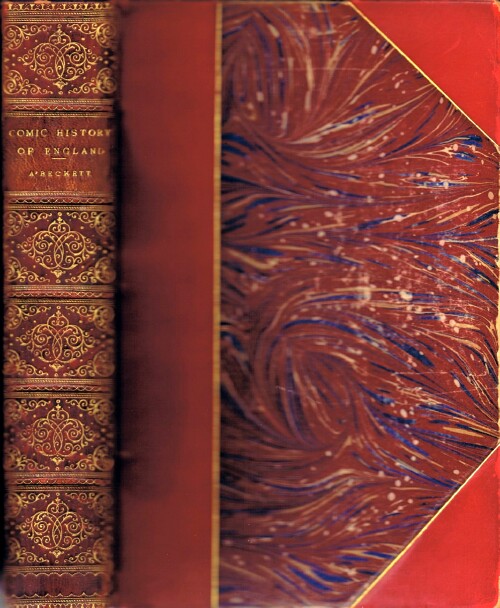 The Comic History of England: with Twenty Coloured Etchings, and Two Hundred Woodcuts by John Leech (Two Volumes bound in One)

Beautifully bound in burgundy half leather over marbled boards by Henry Young and Sons, spine in six compartments separated by raised bands, gilt lettering in one compartment, elaborate gilt tooling in the remainder, gilt borders on covers, marbled endpapers, all edges marbled. nd (c. 1864). Profusely illustrated with 20 hand-colored etchings and 200 woodcuts by John Leech. Gilbert Abbott à Beckett (1811 – 1856) was an English humorist, lawyer and writer. He was born in London, the son of a lawyer, and belonged to a family claiming descent from Thomas Becket. He was educated at Westminster School and was called to the bar at Gray's Inn in 1841. He edited the comic paper "Figaro in London" and was one of the original staff of "Punch" and a contributor until his death. He was an active journalist on "The Times" and "The Morning Herald," contributed a series of light articles to "The Illustrated London News," conducted in 1846 "The Almanack of the Month" and found time to produce some fifty or sixty plays, among them dramatized versions of Charles Dickens's shorter stories, written in collaboration with Mark Lemon. He is perhaps best known as the author of "Comic History of England," "Comic History of Rome," "Comic Blackstone," etc. He wrote the book for two operas with music composed by his wife Mary Anne à Beckett (née Glossop), "Agnes Sorrel" and "Red Riding Hood." John Leech’s "humor is as keen, his sense of fun as marked [as George Cruikshank’s] [Leech’s pictures] are of the most graphic and mirth-producing kind, and yet the raillery is invariably good-humored" (DNB).. The volume is in excellent condition, unmarked, tight, square and clean, with only very minor cover and edge-wear. NEAR FINE. . Color Engravings and B&W Woodcuts. 8vo 8" - 9" tall. xviii, 320, 304 pp

Title: The Comic History of England: with Twenty Coloured Etchings, and Two Hundred Woodcuts by John Leech (Two Volumes bound in One)

The Comic History of England: with Twenty Coloured Etchings, and Two Hundred Woodcuts by John Leech (Two Volumes bound in One)