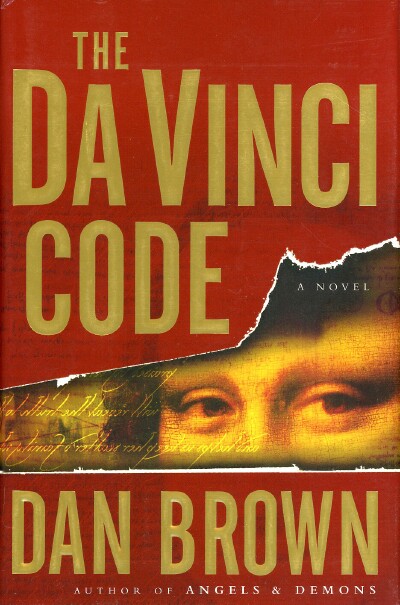 FIRST EDITION, ELEVENTH PRINTING. 8vo. (x) , 454 pp. Quarter bound in publisher's black cloth over black boards, gilt lettering and ruling on spine. This is a new, unopened copy. AS NEW/AS NEW. A sequel to ANGELS & DEMONS, THE DA VINCI CODE starts off with a bang and doesn't quit, leaving the reader gasping to keep up with the twists and turns of this amazingly popular academic thriller. The naked, spread-eagled corpse of a senior curator is found in the Louvre's Grand Gallery, next to a mysterious message written in his blood. The discovery and the subsequent investigation plunge Harvard professor Robert Langdon into the heart of a centuries-old religious conspiracy. Assisted by the brilliant and beautiful Sophie Neveu, a French police cryptologist who also happens to be the curator's granddaughter, Langdon races to gather clues about an ancient goddess-worshipping cult--purportedly once led by Da Vinci himself--whose members hold the key to one of the most sacred legendary objects, the Holy Grail. Meanwhile, the couple must dodge both the police, who believe Langdon guilty of the curator's murder, and an albino assassin from an extremist Catholic sect who is desperate to prevent Langdon and Neveu from uncovering a secret that could rock Christianity to its very foundations. THE DA VINCI CODE is a blockbuster bestseller that has gained legions of fans around the globe; the extremely obsessed can even take a special tour in Paris that points out all the key locations in the storyline. The book also has many detractors who say they have found significant flaws in the religious and historical research upon which it is based. The debate reached such a fever pitch that the Vatican even appointed a Cardinal responsible for refuting the book's claims. The controversy has only increased the book's popularity, producing a whole host of imitators as well as several books and videos purporting either to further explicate or to poke holes in the THE DA VINCI CODE's plot and historical background. Keywords: Grail, Priory of Sion, Knights Templar, Leonardo Da Vinci, Sir Isaac Newton, Merovingian, Plantard, Saint-Claire, Sinclair, Rosslyn, Jesus, Christ, Mary Magdalen, Arian Heresy, King Arthur, Louvre, Harvard, Symbology, Cryptology, Christian, Bible, New Testament. . 8vo - over 7¾" - 9¾" tall. (x) , 454 pp