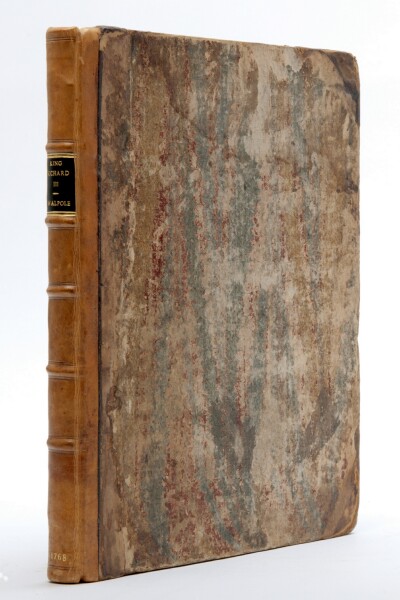 Full contemporary calf over marbled boards, spine in six compartments separated by raised bands, gilt lettering on black label in one compartment. Illustrated with two full-page woodcuts, a frontispiece portrait of Richard III and one of Richard with his queen, Anne. Includes a one page "Addition" concerning the subsequent history of Catherine Gordon, the widow of Perkin Warbeck. The first edition, also published in 1768, but in a limited edition of 1,250 copies, sold out very quickly, and a second edition (of which this copy is one) was published in the same year. Walpole's goal was to rehabilitate the character of Richard the Third, whom Walpole felt had been unfairly vilified by earlier historians. Horatio Walpole, 4th Earl of Orford (1717-1797) was an English art historian, man of letters, antiquarian and Whig politician. He is now largely remembered for Strawberry Hill, the home he built in Twickenham, southwest London where he revived the Gothic style some decades before his Victorian successors, for his Historic Doubts on the Life and Reign of King Richard the Third; and for his Gothic novel, The Castle of Otranto. He was the son of Sir Robert Walpole, and cousin of Admiral Lord Nelson. In Historic Doubts on the Life and Reign of King Richard III (1768), Walpole defended Richard III against the common belief that he murdered the Princes in the Tower. In this he has been followed by other writers, such as Josephine Tey and Valerie Anand.. Expertly refurbished, label and spine exceptionally fresh and clean, boards rubbed and worn, former owner's small printed bookplate on fep with brief pencil notations. VERY GOOD.. Woodcuts. 4to - over 9¾" - 12" tall. xv, [1], 134, [2] pp

Title: Historic Doubts on the Life and Reign of King Richard the Third

Illustrator: Illustrated by Grignion (After Vertue)