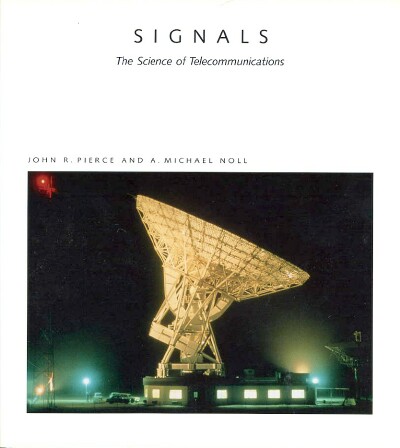 SIGNALS: The Science of Telecommunications

By: Pierce, John R. and A. Michael Noll

FIRST EDITION, FIRST PRINTING. Hardcover with unclipped dust jacket. Bound in publisher's full blue cloth, gilt (silver) lettering on spine. Gray endpapers. Printed on thick, glossy stock. Lavishly illustrated with color photographs, drawings, charts and tables. Small 4to (8.75 x 9.5"). This is volume No. 32 in the Scientific American Library Series. This is a new, unopened copy in perfect, pristine condition. AS NEW/AS NEW. Signals chronicles how ingenious researchers and inventors have transformed the laws of physics into the technology of telecommunications. John R. Pierce (formerly Executive Director of Research in the Communication Sciences Division of Bell Laboratories and Chief Technologist at the Jet Propulsion Laboratory, and now Professor of Music, Emeritus at Stanford University) and A. Michael Noll (an early pioneer of computer art and Professor of Communications at the University of Southern California) first trace the history of the field, profiling the pioneers of the science and the visions of the future, including Fouier and signal spectra, Shannon's Information Theory, studies of human speech, and solid-state quantum physics. They then chronicle the technological progress that has seen telephony grow from signals transmitted one at a time over a single wire to tens of thousands of conversations traveling simultaneously over optical fibers. Both Pierce and Noll were on the scene at the time of such great creations as the transistor (so named by Pierce himself) and they bring to Signals a first-hand appreciation of the people behind the discoveries. Moreover, as they review advances such as the cellular telephone, electronic mail, and the two-way picture-phone, they give a glimpse of the future of human communications. . Scientific American Library Series. Vol. 32. Color Illustrations. 4to - over 9¾" - 12" tall

Title: SIGNALS: The Science of Telecommunications

SIGNALS: The Science of Telecommunications