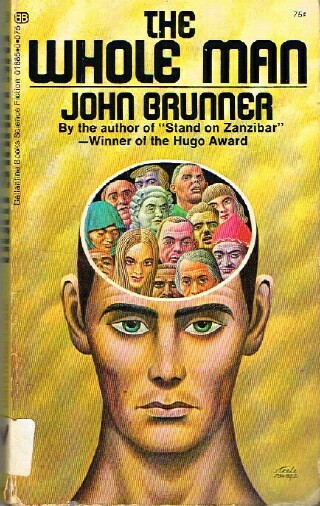 2nd Printing. Publisher's glossy wraps. 12mo. 188 pp. VERY GOOD+. John Kilian Houston Brunner was a prolific British author of science fiction novels and stories. He wrote his first novel, Galactic Storm, at 17, under the name of Gill Hunt, but did not write full time until 1958. At first writing conventional space opera, he later began to experiment with the novel form. His 1968 novel 'Stand on Zanzibar' won the 1969 Hugo Award for best science fiction novel, and is now considered a classic of the genre. 'The Jagged Orbit' won the British SF Award in 1971. Brunner's best-known work is perhaps 1975's proto-Cyberpunk 'The Shockwave Rider', in which he coined the term "worm", used to describe software which reproduces itself across a computer network. " - wikipedia. " Brunner was a giant of sf, dealing at his best with lived-in futures combining extrapolative exhilaration and the nightmare of future shock. 'Stand on Zanzibar' (1968) with its focus on overpopulation was his recognized blockbuster. It slightly overshadows its companion volumes 'The Jagged Orbit' (1969) 'The Sheep Look Up' (1972) -- a scarifying polemic against pollution which ends with the stench of all America burning -- and 'The Shockwave Rider' (1975) prophetically mapping problems of information overload, computer viruses, rampant hacking and the net. John Brunner was cursed by sanity and a hatred of superstition and cant combined with wide-ranging erudition. His peace-activism and left-leaning political views were perhaps factors in his sometimes disappointing US sales. " - Dave Langford. " There are two particularly identifiable phases in his writing career. In the fifties and early sixties, he was turning out numerous competent space adventures. And in the late sixties and early seventies, he was writing near-future socially-oriented fiction. Referred to as dystopias. Many of these books are written under the shadow of the Viet Nam war. The 3-part short novel concerning a handicapped man and his "wild talents" (as Charles Fort would say) : He was a menace - the ultimate power in controlled telepathy! Gerald Howson was born in the gutter, with the body of a cripple he was raised in harsh poverty and he would grow up with a mind of transcendant power. What kind of a man would he be? A daring and fascinating exploration into the possibilities that include the marvel of internal creation - or the threat of death! Originally published in the US in softcover format in 1964, and in the UK in 1965 under title: Telepathist (see Currey, pages 73-74) Anatomy of Wonder (1995) 4- 75. Barron AW, 4-94. Pringle Ultimate SF, 314, 420 CN SF Encyclo, pp 165-8. 1965 Hugo Finalist for Best Novel. . Mass Market Paperback. 12mo - over 6¾" - 7¾" tall