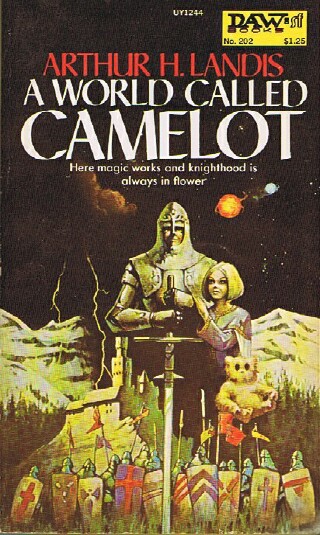 Stated 1st Printing. Publisher's glossy pictorial wraps. 12mo. 220 pp. This is a new, unopened copy in perfect, unmarked condition. FINE. A World Called Camelot was originally serialised (Coven 13, 1970/71), as Let There Be Magick by James R. Keaveny. Publisher's Code UY1224. Daw No. 202. The natives called Fomalhaut ll by the name of Fergis. In Galactic listings the Watchers and Adjusters called it Camelot for good reasons. For one thing, magic seemed to work. For another, knighthood was the order of the day and a strict chivalry ruled the lands, For a third, there was evil in the world to be combatted. Mere observation from orbit no longer sufficed, because now that evil had assumed menacing and warlike porportions. Armies and huge flying dragons were moving from the sinister southlands to overwnelm this world, much as the legions of legendary had moved to conquer Middle Earth. It is time for an Adjuster to step in and unravel the mysteries of Camelot. And that thask fell to Kyrie fern, henceforth to be known as Harl Lenti, swordsman and manipulator of a mightier magic--that of galactic science. . Mass Market Paperback. 12mo - over 6¾" - 7¾" tall