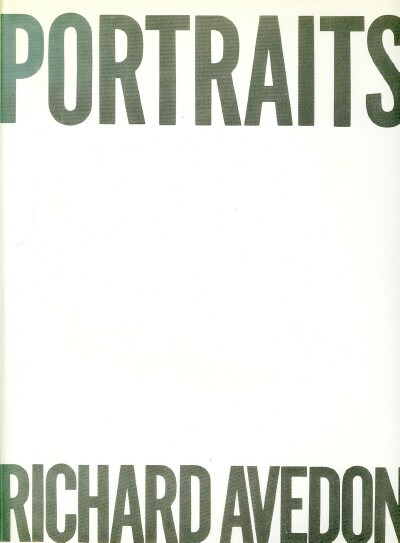 Publisher's full white cloth, gilt (gray) lettering on spine. (144) pp. Illustrated with 53 full-page B&W portraits, 17 B&W photo illustrations and four multi-panel fold-out photographs. Includes an introductory Essay by Harold Rosenberg. FIRST EDITION, FIRST PRINTING, SIGNED BY THE AUTHOR. Hardcover with unclipped dust jacket. Boldly inscribed and dated ("11-18-76") in pencil by Richard Avedon on the ffep. The volume is in perfect condition, with no marks other than the author's inscription. The dust jacket (now in Mylar) has only the slightest smudge on the rear panel, else as new. AS NEW/FINE. The portraits are of notables of our time, each identified with the sitting date recorded. The portraits include celebrities and artists from the 1950s, 60s and 70s - Marilyn Monroe, William F. Buckley, Igor Stravinsky, the Chicago Seven, Alberto Giacometti, Marcel Duchamp, Marianne Moore, The Duke and Duchess of Windsor, Ezra Pound, the Everly Brothers, Gabriel Garcia Marquez, Jean Genet, Truman Capote, J. Robert Oppenheimer, President Eisenhower, and many more. Also included are a final series of eloquent portraits of his dying father, Jacob Israel Avedon, taken between October 1969 and August 1973. This is an impressive retrospective of some of Avedon's finest portraits. A fashion photographer for "Harper's Bazaar" from 1945 to 1965, Avedon became known for his stark images of people in unusual poses, leading to his first book of celebrity portraits, "Observations" (1959). He spent the better part of the 1960s outside the studio, photographing the Civil Rights and Anti-War movements. Leaving "Harper's Bazaar" for "Vogue" in 1966, Avedon has organized several celebrated and controversial exhibitions of his work, including "Avedon: Photographs 1947-1977" and "In the American West," receiving a national award for visual excellence in 1976. Avedon became the first staff photographer for The New Yorker in 1992. He has won many awards for his photography, including the International Center of Photography Master of Photography Award in 1993, the Prix Nadar in 1994, and the Royal Photographic Society 150th Anniversary Medal in 2003. He died in 2004. It is a masterful collection by the acknowledged master of portrait photography. Quite scarce in this excellent condition and signed by the author.. B&W Photographs. 4to (approx 9 x 12"). (144) pp. Signed by Author