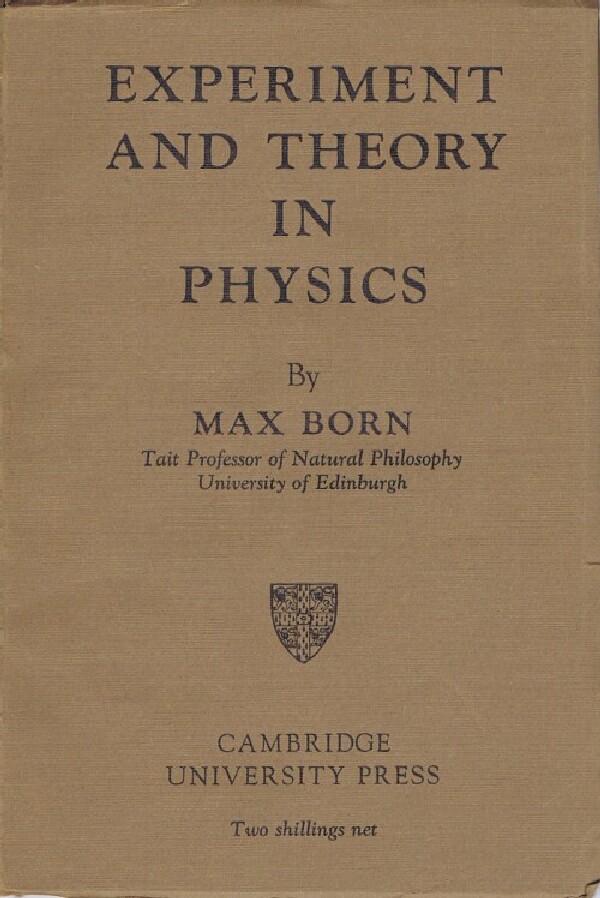 EXPERIMENT AND THEORY IN PHYSICS

FIRST EDITION, FIRST PRINTING. Publisher's original brown printed wraps. Born describes his writing of this book as follows: "I came in touch with Sir Arthur Eddington. . . . He was working with the same group of spinor matrices which I used in order to linearize the non-linear field equations, for a quite different purpose, namely in an attempt to derive the ultimate laws of physics a priori, in particular the fine structure constant (or its reciprocal hc/e2 = 137). I have never had much confidence in such a philosophical approach to science and later explained my standpoint in a little book, Experiment and Theory in Physics. . ." (Max Born, My Life, p. 268). This paper represents in a slightly expanded form an address given to the Durham Philosophical Society and the Pure Science Society, King's College, at Newcastle-upon-Tyne, on May 21, 1943. Max Born (1882-1970) was a German physicist and mathematician who was instrumental in the development of quantum mechanics. He also made contributions to solid-state physics and optics and supervised the work of a number of notable physicists in the 1920s and 1930s. Born won the 1954 Nobel Prize in Physics for his "fundamental research in Quantum Mechanics, especially in the statistical interpretation of the wave function".. The volume is in excellent, unopened condition, with a former owner's (physicist Ellis Steinberg) name neatly written in pencil on the half-title, else as new. FINE.. 12mo 7" - 7½" tall. (iv), 44 pp

Title: EXPERIMENT AND THEORY IN PHYSICS

EXPERIMENT AND THEORY IN PHYSICS