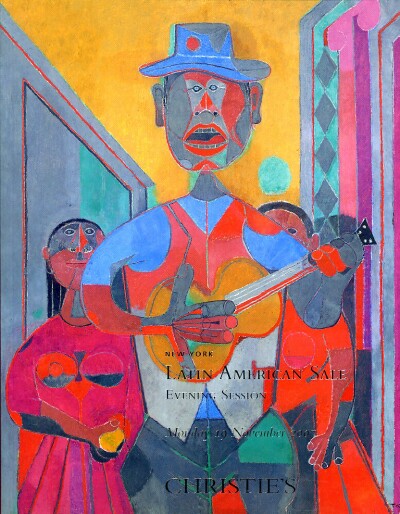 Christie's catalogs for Sale Nos. 1907A and 1907B, held in New York on November 19 and 20, 2007. The Evening Sale on November 19 has 185 pp. and 78 lots. The Day Sale on November 20 has 233 pp. and 224 lots. All lots are illustrated in color, with several fold-outs. "Following yesterday’s spirited Evening Sale of Latin American Art which realized $21,671,000 and set twelve new world auction, the Day Sale continued in the same energetic vein, bringing the Fall 2007 total to $28,118,088. Combined with the $28.9 million fetched in the Spring 2007 Latin American Sale and the $2.78 million total achieved for the selection of Latin American Paintings included in the July 17 & 18 María Félix: La Doña sale, Christie’s grand total for Latin American Art this year is $59.8 million."The Latin American Art market has made a strong comeback with a record year for the field at Christie’s," said Virgilio Garza, Head of the Latin American Art department. "The two Latin American Sales Christie’s organized in 2007 broke records for the Mexican masters such as Alfredo Ramos Martínez, Remedios Varo, Leonora Carrington, and for contemporary artists such as Adriana Varejão, and Kcho, among many others. Fernando Botero was a strong force in the field and continues his reputation as the most successful living Latin American artist. This category has rapidly and deservedly, transformed into a truly global collecting field with a demographic of buyers.""The Evening Sale was noteworthy on many levels. The persistent demand for modern Mexican paintings was clearly visible with a 100% sold Tamayo segment and very strong prices for concrete & geometric South American abstraction, including for works by Hlito, Asis, and Camargo. It was also a remarkable feat to have two new record prices for women artists - $1.27 million for Remedios Varo and $457,000 for Amelia Pelaez - a wonderful achievement which emphasizes the importance and recognition of female artists in the Latin American realm. And last but not least, the new record established for a sculpture by Botero at $1.6 million for his majestic Mujer Fumando, univocally re-endorsed his position as the most revered and sought after living Latin American artist."In July, the auction of the estate of María Félix - La Doña focused the world’s eyes on New York as hundreds of fans paid tribute to the international movie star, art collector and humanitarian. Over the course of two days, auctioneers fielded lively bids from an international audience, with active bidding in the room, on the phone, and a strong presence from online buyers which resulted in a $7.3 million total, far succeeding the pre-sale estimate and once again honoring the immense appeal of the inimitable La Doña.". Both volumes are in perfect, pristine condition, unmarked, unread, tight, square and clean. AS NEW. . Christie's Auction Catalogs Series. Catalog. Vol. 1907. Color Photographs. 4to 11" - 13" tall. 185; 233 pp