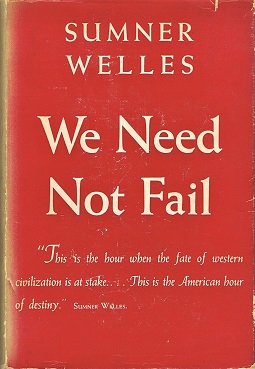 We Need Not Fail

Publisher's full beige cloth, red lettering on spine and cover. Benjamin Sumner Welles (1892 1961) was an American government official and diplomat in the Foreign Service. He was a major foreign policy adviser to President Franklin D. Roosevelt and served as Under Secretary of State from 1936 to 1943, during FDR's presidency. "In 1948, Welles authored We Need Not Fail, a short book that first presented a history and evaluated the competing claims to Palestine. He argued that American policy should insist on the fulfillment of the 1947 promise of the United Nations General Assembly to est...
View More...